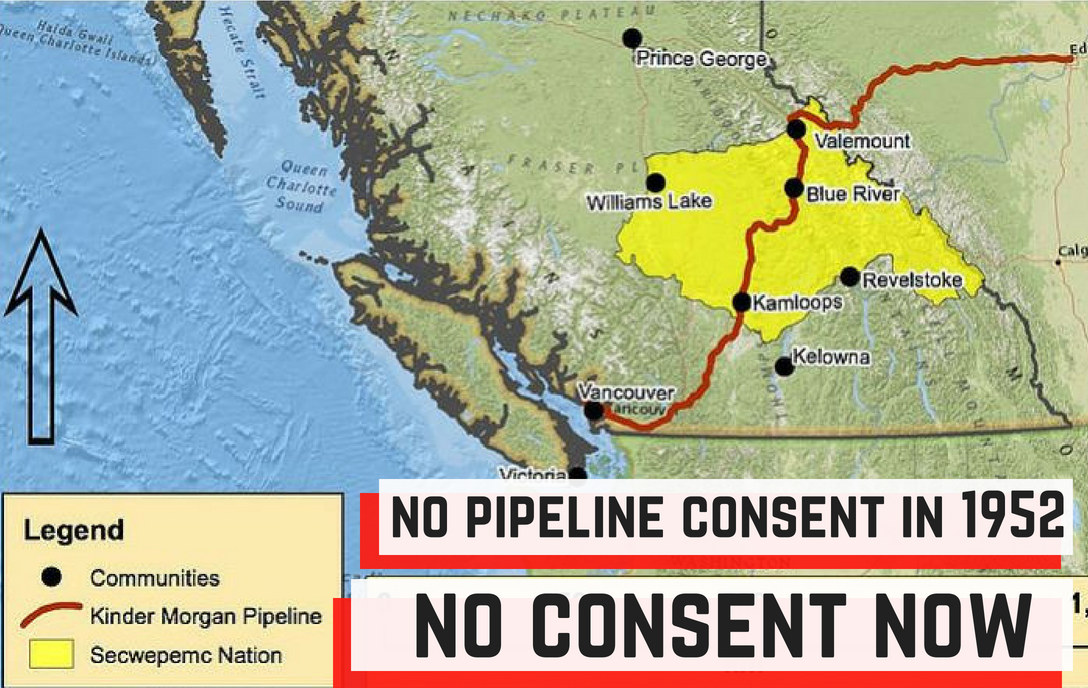 By The Indigenous Network on Economies and Trade (INET)
April 13, 2018

This was confirmed by Kinder Morgan Limited (KML) Canada this weekend, when following another mobilization by Indigenous Peoples against the TMEP, KML announced that it is suspending non-essential spending on the TMEP because the risks to investors are too great.​

The announcement took investors by surprise and shows that the TMEP has come to a breaking point, where there will either be a decision to cut the losses and stop the project now, or provoke further conflict and confrontation, which will only increase risks.

Though much attention has been focused on inter-jurisdictional struggle between the federal and provincial governments over regulation and environmental assessment, the company and governments have both failed to dispense their legal duties of obtaining consent from the proper title holders of the land. The failure to take into account Indigenous jurisdiction and land rights continues cannot be remedied. There is no recovering from this failure to properly assess risks and from the announcement by KML.

​Secwepemc land defender, Kanahus Manuel stated: “Kinder Morgan is misleading investors by suggesting they have secured the land base and Indigenous consent for the Trans Mountain pipeline.  They do not have consent from the Secwepemc and failure to recognize Secwepemc title, land rights and indigenous jurisdiction, will only result in more conflict, direct actions, blockades and Indigenous land occupations which will increase the risks and economic uncertainty for Kinder Morgan and its construction deadlines.”

As the updated INET summary brief, released, today, April 13, 2018, “Standing Rock of the North” states:  “Despite the company’s insistence that the threats to the pipeline come from the provincial government, it is Indigenous jurisdiction that poses the greatest threat. Indigenous Peoples from across B.C., as well as non-Indigenous allies, have shown their opposition to the project, and its violation of Indigenous jurisdiction, through physical blockades. Kinder Morgan’s failure to take into account indigenous land rights and jurisdiction, including failure to obtain the prior informed consent of Indigenous Peoples, constitutes the greatest risk to the proposed development and investments. The surprise announcement from Kinder Morgan came on that same weekend that the company refrained from having high-profile Indigenous leaders arrested that joined in a blockade at its facility in Burnaby. This indicates the company recognizes the risks posed from rejection of the project by Indigenous Peoples. The failure of KML to yet again disclose those risks should be deeply disconcerting to investors and lenders.”

Over half of the proposed pipeline route of Kinder Morgan Canada’s Trans Mountain Expansion Project (TMEP) passes through Secwepemc territory in the south-central Interior of British Columbia.

In the fall of 2017, INET prepared the Secwepemc Risk Assessment of the Kinder Morgan Trans Mountain Pipeline Expansion Project that detailed the risks to investors, including Secwepemc land defence risk, legal risk, economic risk, political risk, reputational risk, regulatory risk and climate risk. It was tabled with investors in North America and Europe. Since then these risks and opposition to the TMEP project led by Indigenous Peoples has only grown.

​“Kinder Morgan’s announcement of a work stoppage is a win for land and water defenders and their dedication to environmental protection. There is a clear opposition to the tripling of the Kinder Morgan pipeline and the extraction of fossil fuels from the tar sands. Kinder Morgan’s announcement was not only irresponsible from an investor’ perspective, it is even more irresponsible since it calls on Canada to use executive force, while failing to take into account Aboriginal Title and Rights. This is a fundamental human and indigenous rights issue. INET has raised concerns about Canada’s oppressive tactics, including use of court injunctions to access Indigenous peoples' resources, with the UN Committee on the Elimination of Racial Discrimination.  The stoppage reveals that Indigenous peoples' rights have weight and there is a clear need for the full recognition of Indigenous peoples' rights, anything else, including the use of force, will just result in increased uncertainty and risk.”