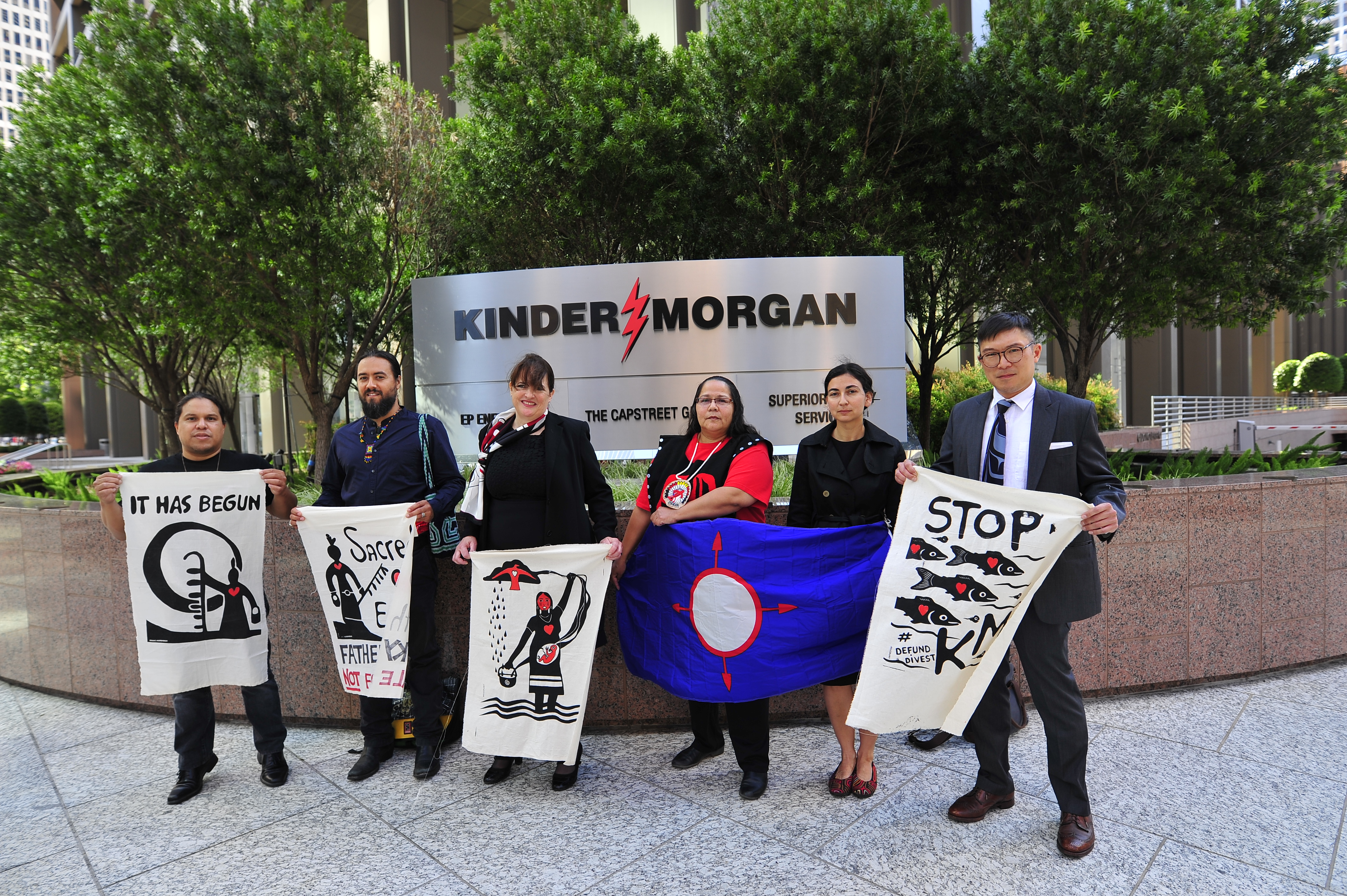 May 9, 2018, (Estok-Na Territory/Houston, Texas) Indigenous leadership from Canada made an emergency trip to the Kinder Morgan AGM in Houston this morning to present an overview of Indigenous opposition to the proposed Trans Mountain Pipeline expansion.

The resolution presented by Chief Wilson was passed with support from a majority of stockholders including CalPERS and the Norway Sovereign Wealth fund, collectively representing over 400 million in shareholder value, and was supported by the largest proxy advisory firm ISS. This demonstrates an unprecedented shift in stockholder sentiment.

“Kinder Morgan has been promoting the Trans-Mountain expansion to its stockholders without explaining all the drastic risks of Indigenous opposition, backed by court decisions recognizing our Indigenous Rights,” stated Chief Judy Wilson. “This morning at the AGM, I was overwhelmed and impressed with the understanding from stockholders of the need to have our Indigenous Title and Rights, and Treaty Rights, respected in order for their investments to have any certainty.”

The significance of opposition from Indigenous peoples cannot be overestimated. In BC, the vast majority of Indigenous Nations have not entered into treaties, and therefore enjoy full Title and Rights over their unceded territories. Many Nations along the proposed pipeline route are not in support of Kinder Morgan TMX. If any one Nation along the route does not provide their consent, the project cannot proceed.

Rueben George, Tsleil-Waututh Nation Sacred Trust Initiative, stated “I came to Houston two years ago, and three years ago, to warn stockholders that the Trans Mountain expansion would not be built and that we were not going to provide our consent. We are pleased to hear that they are now coming around to this reality, but we are sorry that all this time and money has been spent. It could have been avoided and having a sustainability report might have allowed Kinder Morgan’s board of directors to more accurately evaluate these project risks.”

Chief Wilson concluded “This morning, I delivered a fundamental message to Kinder Morgan stockholders. The new reality is that there is a changed political landscape in BC with recognition our inherent Indigenous Title and Rights, the implementation without qualification of the UN Declaration and the Truth and Reconciliation 94 Calls for Action across our country, overdue legal recognition of our title declaration of our territorial title, and especially free, prior and informed consent.

We do not believe that the risks of this project have been accurately evaluated nor fully disclosed, and we want you to know that we have the law on our side and we intend to enforce our rights. We are here to tell you that no matter what the Canadian government does to minimize political or financial risks, we will not stop fighting the Trans Mountain Pipeline expansion because it threatens our culture, spirituality and identity. This means further delay, risk and uncertainty for the project.”

May 9, 2018, Unceded Coast Salish Territories/Vancouver BC: Kinder Morgan has stated that they may abandon the controversial TMX project by May 31st, 2018, citing political risk and uncertainty.

While political risk associated with the province of British Columbia’s opposition is significant, the project faces additional risk and uncertainty from 16 ongoing legal challenges, and growing opposition on the ground resulting in nearly 200 arrests in the last month.

Indigenous opposition to the project has been under-reported by Kinder Morgan. While the company claims that 43 First Nations have signed Mutual Benefit Agreements (MBA), this represents less than 1/3 of the affected First Nations on the pipeline and tanker route. Indeed, First Nations support for the pipeline is decreasing: one year ago, the number of First Nations with MBAs was 51.

But the numbers of MBAs is a red herring when it comes to Aboriginal rights. A linear project like a pipeline needs to be 100% complete to be 1% effective. And specific First Nations’ concerns around drinking water, fishing rights and oil spills are not eliminated by other nations signing deals.

In short, even if just one First Nation’s constitutionally-protected rights were violated, then the legal risk to the project remains, regardless of agreements the company has signed with other nations.

Legal risk: 16 outstanding legal challenges to federal and BC approvals, and a reference case

Sixteen legal challenges to the federal and provincial approvals remain outstanding, with no guarantee that a decision will come before the May 31 deadline. In fact, when asked about the 14 consolidated cases at the Federal Court of Appeal, Kinder Morgan CEO Steven Kean stated (at 21:30):

[I]f that appeal has an adverse outcome, meaning that the order in council is overturned on appeal then that means the whole underlying approval and basis for this project has gone away.

[…] It would also be very concerning if, for example, that order comes back and it sends us back to do more work, right, so that if the order in council is largely affirmed, but then there are one two three things that need to go have further record developed, additional time spent, additional conditions perhaps imposed and then those go up on appeal too, that's just I think that's just too much to bear given the point where we are. So it is a separate thing that we have to watch for and see a satisfactory result on, on the judicial review. [emphasis added]

Recent developments from an investigative journalist at the National Observer cite documents obtained through access to information records suggest that the Canadian government’s constitutionally required consultation process was rigged, which supports the arguments put forward by the First Nations challenging the federal approvals at the Federal Court of Appeal. This was confirmed by whistleblowers inside the federal government. Tsleil Waututh First Nation has applied to the FCA to include those documents in the evidentiary record, which could scuttle the TMX timelines. The FCA expected to rule in the coming weeks on the motion, and could rule on the consolidated cases in June.

In other words, regardless of the political uncertainty and Kinder Morgan’s May 31 deadline, a win on any of the legal issues before the Federal Court of Appeal (FCA), and even a future appeal of the FCA’s decision to the Supreme Court of Canada, would be too much to bear for Kinder Morgan.

Kinder Morgan has never built an oil pipeline in Canada, and the recent focus on political uncertainty has conveniently obscured its own role in the current delays.

The company’s attempts to speed up the regulatory processes may backfire, and cause more uncertainty and risk. In January 2016, Kinder Morgan Canada CEO Ian Anderson lobbied the federal government to shorten the timeline for the decision, which was made in November 2016. This meant that the consultation period was also shortened, which the First Nations argued at the FCA contributed to the inadequacies of the process.

Mandatory National Energy Board detailed route hearings have been extended due to Kinder Morgan’s failure to publish notices on schedule for what it knew would be contested hearings. Those hearings were removed from Kinder Morgan’s May 2017 project schedule, even though the company knew that the route would be contested, in order to maintain the illusion of a December 2019 in-service date just before KML launched its initial public offering. In recent weeks, Kinder Morgan applied to extend the route hearings by four months.

The NEB also recently denied KMI’s attempt to shield itself from oil spill liability from the project, when they rejected a request to transfer a $500M oil spill fund from KMI to a credit facility with Canadian banks. This is $500M cash that KMI cannot spend elsewhere and represents half of the $1B possible liability for an oil spill, regardless of fault. In the instance of an at-fault spill, KML could face unlimited liability.

Recent polls suggest that the majority of Canadians feel that Kinder Morgan could have done a better job of earning public support for this project and brought much of this [protest] on it itself. This number was consistent for pipeline supporters and opponents.

All of this means that, regardless any actions taken by the Canadian government to reduce risk, TMX will continue to face significant uncertainty moving forward.