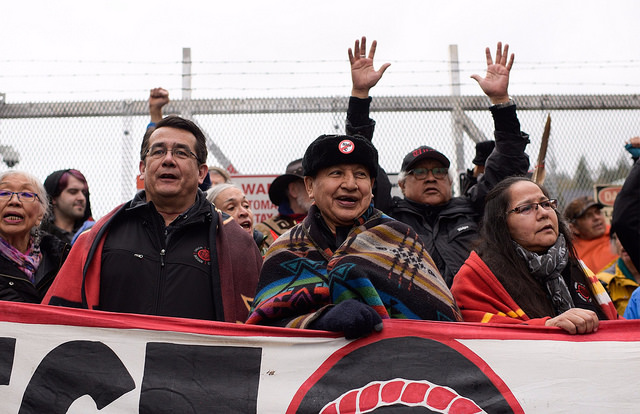 (Coast Salish Territory/Vancouver, B.C. – January 10, 2019) Yesterday Premier John Horgan provided insufficient and inappropriate comments regarding the ongoing conflict in Wet’suwet’en territory. The Premier took a minimum approach to acceptable provincial standards for engagement with Indigenous peoples, in direct conflict with his government’s commitments to full implementation of the United Nations Declaration on the Rights of Indigenous Peoples (UN Declaration).

The Union of BC Indian Chiefs (UBCIC) is concerned that Premier Horgan stated that in his view, “LNG Canada has shown the importance of consultation and meaningful reconciliation with First Nations and that’s why they have signed agreements with every First Nation along the pipeline corridor.”

“First, we are beyond consultation and we need to be talking about consent,” responded Grand Chief Stewart Phillip, President of the UBCIC. “Second, there is no way that meaningful reconciliation has been achieved considering we had RCMP using excessive force at the Gitimd’en Camp on Monday of this week, in direct violation of article 10 of the UN Declaration which states that ‘Indigenous Peoples shall not be forcibly removed from their lands or territories.’ In 2019 we fully expect the Provincial government to ensure that its political commitments are reflected in every single action and decision taken. We reject the racist notion of veto perpetuated by industry and government, which falsely implies that Indigenous Peoples demand a unilateral final say on decisions that impact them. The UN Declaration makes no mention of the word veto.  We want to have an equal say and have our perspectives respected and upheld.  Since colonization, we have had to deal with the Crown having a veto over almost every aspect of our lives, and in the case of the Unist’ot’en, we just watched what their veto over the peacefully protesting Wet’suwet’en land defenders looked like.”

Kukpi7 Judy Wilson, Secretary-Treasurer of the UBCIC, stated “Prime Minister Trudeau continues to defend Canada’s support of the Trans Mountain pipeline expansion (TMX) despite a lack of consent from Indigenous people impacted. We are disappointed that Premier Horgan is now joining with Prime Minister Trudeau with this defense in the case of the Unist’ot’en. Where Nations have not ceded their Title and Rights, they have control over the entire territory.  As the Supreme Court of Canada recognized in Delgamuukw, inherent Wet’suwet’en Title to their territory has never been extinguished.  The Proper Title holders must provide their free, prior and informed consent to any project in their territory.”

Another troubling aspect of the Premier’s statement included comparing the Province’s role in the ongoing conflict in Wet’suwet’en territory with the recent consent-based negotiations in the Broughton Archipelago with the ‘Namgis, Kwikwasutinuxw Haxwa’mis and Mamalilikulla First Nations.

Chief Bob Chamberlin of the Kwikwasutinuxw Haxwa’mis First Nation (KHFN), and Vice-President of the Union of BC Indian Chiefs (UBCIC), stated “There are not a lot of similarities between the Broughton and the Unist’ot’en engagement with the Province. In June, government-to-government work between our three Nations and the Province was confirmed in a letter of understanding (LOU) formalizing ongoing talks regarding salmon aquaculture in the Broughton Archipelago. Importantly, this was a jointly developed consent-based process where our Title and Rights were recognized and as a result, we included our hereditary leadership in decision-making on outcomes. That’s an extremely important distinction because for us, that’s how we respected Delgamuukw and the wishes of our people. The Province also followed its own decision-making process. There was space in the process to revisit any Tenure decisions that weren’t jointly accepted. I’m confident that we would not have reached a point of RCMP action at Gitimd’en if a jointly designed, consent-based process had been in place.”

“Of course, under the UN Declaration it is the Crown’s responsibility to ensure that consent has been achieved,” concluded Grand Chief Stewart Phillip. “The Premier has committed to implementing legislation on the UN Declaration and now it is more important than ever that this be accelerated. Otherwise, 2019 shall prove to truly be Battleground BC!”