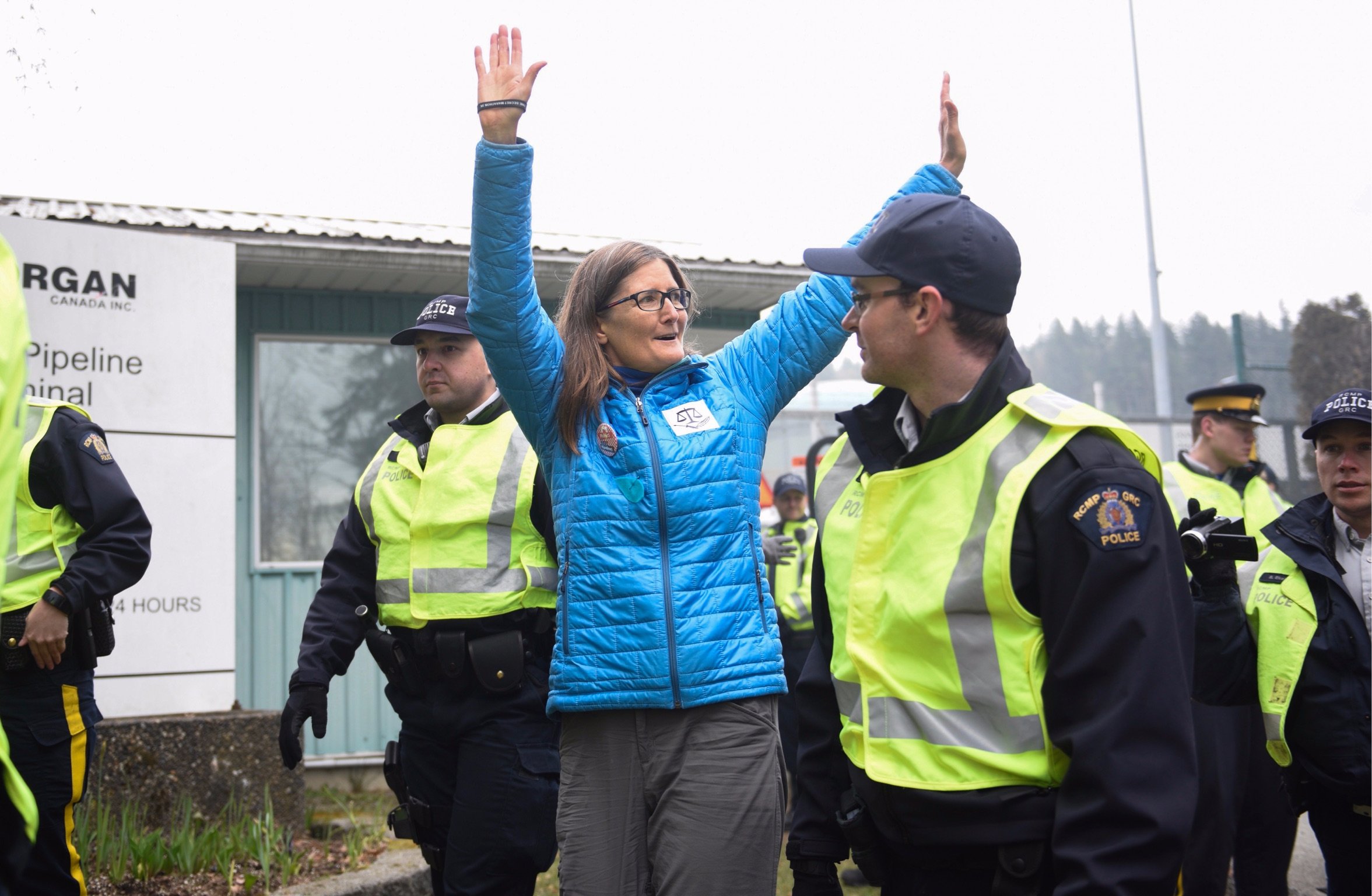 “We lived and worked in fear when I worked for Trans Mountain, because the reality is that no amount of equipment or people is going to change the fact that in the event of a spill, they will be able to recover very little.”

20 March 2018, Unceded Coast Salish Territories (Vancouver) — A former environmental engineer for Trans Mountain has been arrested with a group of students and youth at the gates of Kinder Morgan’s Burnaby Mountain tank farm.

“I worked for Trans Mountain’s environmental department in the 1990s. If there is a tanker spill or spill from the pipeline itself, from Edmonton to Vancouver and down to Washington, the best Trans Mountain will be able to do, even today, is between 10 and 20% recovery.

The rest will remain in the environment, damaging fish, birds, crabs – everything you can imagine. We lived and worked in fear when I worked for Trans Mountain, because the reality is that no amount of equipment or people is going to change the fact that in the event of a spill, they will be able to recover very little.”

Protesters arrived on site at around 11:00 am and tied themselves to the main gates of Kinder Morgan’s Burnaby construction site, blocking the entrance.

Ten were arrested today, making more than 60 people who have been arrested in opposition to Kinder Morgan’s pipeline project since the first day of action on Saturday, March 17th.

Early Monday, a 70-year-old grandfather scaled and set up camp in a tree directly in the path of Kinder Morgan’s clear-cutting activity. He was arrested and removed at 8:00 p.m. by the B.C. RCMP Emergency Response Team (ERT). Kinder Morgan must finish cutting trees before the March 26th deadline, when migratory birds will begin nesting.

Following the estimated 10,000 person-strong march and rally against Kinder Morgan last Saturday, bold demonstrations of daily resistance from residents all over British Columbia are expected to continue throughout the week. Solidarity actions are also spreading south of the border; on Sunday, kayaktivists took to the water to block access to Kinder Morgan’s oil terminal in Seattle.

Current opposition to Kinder Morgan’s pipeline and tanker project includes the Province of British Columbia, the state of Washington, the cities of Vancouver, Burnaby, and Victoria and 19 other BC municipalities and 250,000 petition signers. More than 23,000 have taken a pledge to do “whatever it takes” to stop Kinder Morgan. One-in-ten British Columbians, and one-in-four opponents of Kinder Morgan’s new pipeline in British Columbia say they would be willing to take peaceful civil disobedience to resist the pipeline.