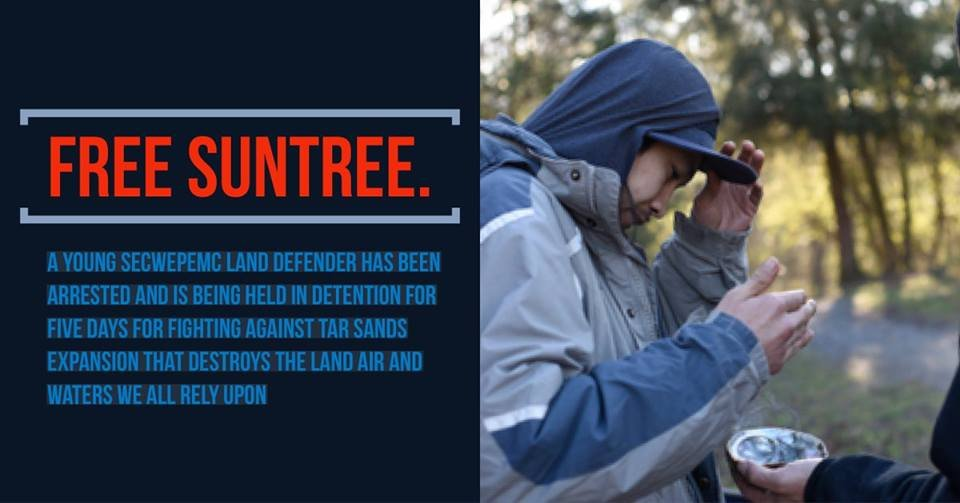 April 3, 2018, VANCOUVER, COAST SALISH TERRITORIES – For the past six days, Secwepemc land defender Suntree Johnson Larue has been in police custody after an undercover police ambush at Burnaby Mountain. The RCMP targeted Suntree with a coordinated and forceful attack as he was walking near the gates of the Kinder Morgan tank farm in Burnaby.

Suntree recently traveled to Burnaby to stand with Coast Salish peoples to defend their collective Indigenous rights and title. Over half the length of the proposed Trans Mountain pipeline threatens to cross through Suntree’s own unceded Secwepemc territory in the interior.

“We as Indigenous peoples are on the frontlines of fighting for our homelands and lifeways in the face of corporate-colonial threats like the Kinder Morgan pipeline. But whenever we exercise our inherent rights, we are subject to criminalization and human rights violations,” says Kanahus Manuel of the Secwepemc Women’s Warrior Society and Tiny House Warriors. “Canada is abusing its power by using police and courts to try to silence us. We cannot accept the systematic and illegal criminalization of Indigenous land defenders for exercising our internationally-protected Indigenous Rights and Title.”

According to Grand Chief Stewart Philip, “With our voice, in the courts, or the streets, on the water, or the land, whatever it takes, we will stop Kinder Morgan. Prime Minister Justin Trudeau's approval of this reckless Kinder Morgan tar sands pipeline project denies inherent Indigenous Title and Rights and violates the United Nations' Declaration on the Rights of Indigenous Peoples. On Saturday April 7 at 11 am I will be leading a march and getting arrested at the gates of Kinder Morgan. As an Indigenous person, I am affirming my personal and collective right and commitment to the land and the water.”

“The day after my graduation ceremony, I went up to Burnaby Mountain with my mother and two children. Several people including myself stood in front a truck. The police approached us but several people asserted their Indigenous rights and we sang the Women’s Warrior Song. I left the front of the truck and was standing on the side when two police officers approached me. I asserted my inherent rights as a Tsimshian and Haisla woman. Within seconds I heard my mother, who was being physically harmed by the police, and my son who had just left my arms. I struggled as I watched my kids who were scared and I tried to get to them, but the police forced me into a stretcher. What was clear to me that day was how the police were so much more violent in their treatment of Indigenous bodies.”

Continues Manuel, “This is not the first time Canada has violated our inherent Indigenous laws and jurisdiction and criminalized us for upholding our responsibilities. We survived through Potlatch Laws for over twenty years when our people faced jail for practicing our potlaches. Now we are being arrested for defending our inherent and constitutionally-protected rights to land, water, and culture.”

Says Will George, Watch house guardian and Tsleil Waututh member, “Our spiritual leaders and elders guided the vision of our Watch-house to watch over and protect our lands. We are sending a clear message to Kinder Morgan and Prime Minister Justin Trudeau that this pipeline will not be built. We will remain here and we will protect the lands we have lived on since time immemorial. We are people of the inlet and these waters flow through us. Our teachings will guide the way to a better future.”