April 26, 2021, Unceded Coast Salish Territories (Burnaby, BC)— A four month federal stop work order has been issued on Trans Mountain’s pipeline construction, the result of local community members discovering hummingbird nests during tree cutting in the area. The delay, according to an earlier affidavit by a Trans Mountain executive, would push the pipeline’s construction date past 2022, adding millions to the taxpayer-funded project. 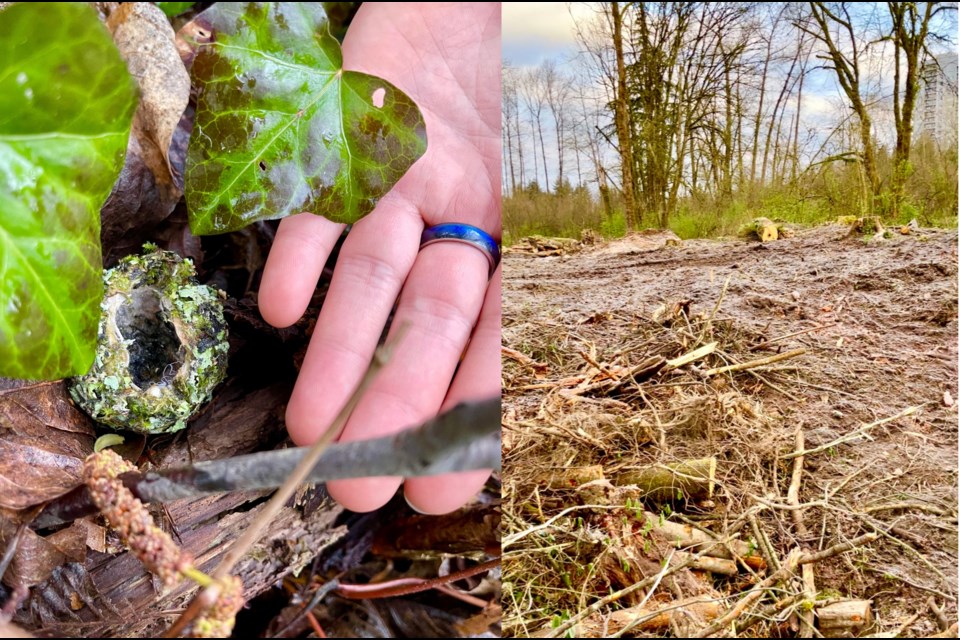 “When the government is the owner as well as the regulator, it means groups like ours are imperative. Our members have confirmed eight active nests on this site, but there are hundreds, likely thousands more bird nests along the 1,500 km of the pipeline route. And yet, construction continues without adequate government monitoring or protection,” said Sara Ross, of the Community Nest Finding Network (CNFN), a community group that alerted Federal Wildlife Officers in early April with concerns about non-compliance to the Migratory Birds Convention Act.

An alert by CNFN led Federal Officers to witness the felling of a tree with a hummingbird’s nest in it on April 12th. In violation of the Migratory Birds Regulations, ECCC issued a stop order until August 21st. Trans Mountain said in an affidavit (pages 18 to 20) that tree clearing in the area had to be completed prior to August 1 to allow access to the streams. If that didn’t happen (which now it can't) Trans Mountain will miss its 2021 window for watercourse crossing, its 2022 window for hydrotesting, and its 2022 in-service date. Pipeline work at this location must now wait until next year, 2022. The delay comes at a cost of at least $100 million per month of delay past the in-service date, according to Trans Mountain.

“This is another costly example of Trans Mountain’s disregard for the rules that has happened far too often throughout construction. It was only because of the incredible work of local residents that they were caught red handed,” said Eugene Kung, staff lawyer at West Coast Environmental Law. “With every delay, the total cost to taxpayers balloons and the project falls further outside the public interest. We have not seen a cost update in more than a year, but it’s easy to estimate the cost being closer to $20 billion today.”

In addition to the new four month delay, progress reports from Trans Mountain show construction delays in almost all segments of the pipeline. More delays mean a higher price. The PBO estimated (two years ago) that the cost of a year’s delay to TMX was $638 million annually.

“It’s difficult to stomach that such a threat to birds, ecosystems and our climate is the result of a pipeline the federal government’s own data shows is not even needed,” said Donna Clark, of the CNFN and former Director Wild Bird Trust of BC.

Kukpi7 Judy Wilson, Executive Board member of the Union of B.C. Indian Chiefs (UBCIC), said, “It is very symbolic that a tiny hummingbird has stopped local construction of this pipeline. At the same time, it is not entirely surprising, either. Many stories of honour the qualities of Hummingbird, and one that stands out, in particular, is Hummingbird’s tenacious loyalty to the forest. Even as the forest burned and all the other animals fled, Hummingbird carried drops of water - in their tiny beak - from the river to the forest fire. In response to the other animals, Hummingbird said: “I’m doing what I can.”

Kukpi7 Judy closed by stating, “I’m grateful for the efforts of all the land defenders, especially the Community Nest Finding Network (CNFN). We all rely on healthy land and water, no one is exempt, and it is so important that we continue protecting Mother Earth in good ways.”