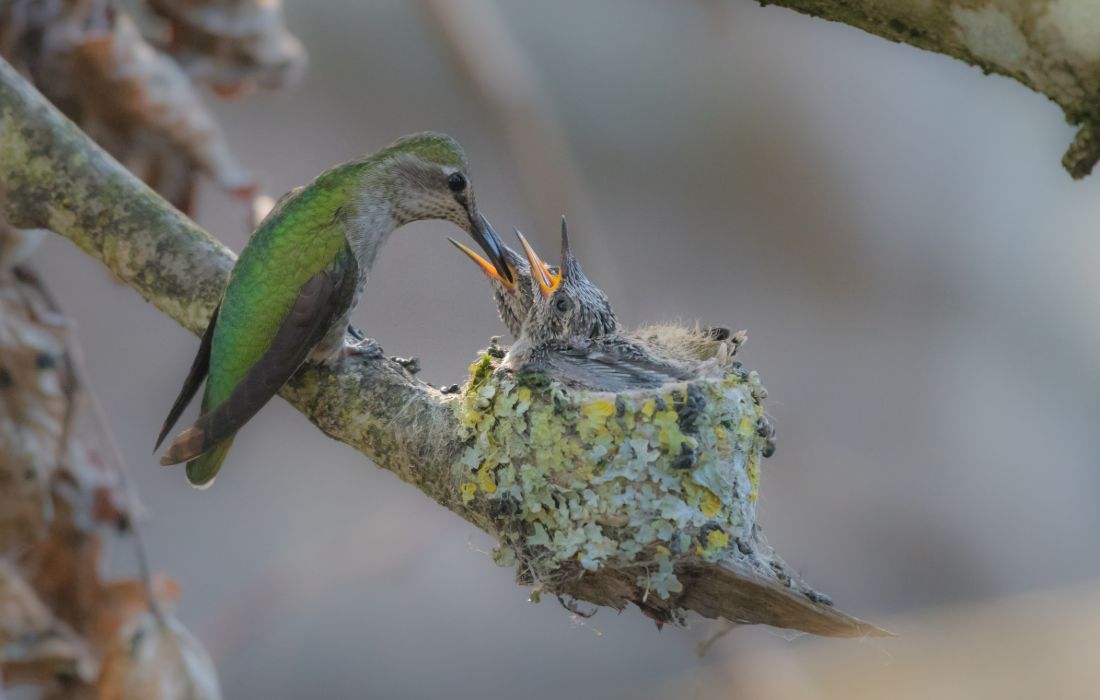 The Crown corporation has been clearcutting the Brunette River Conservation Area in its construction of the Trans Mountain Expansion (TMX) pipeline. Tree cutting and total removal of all vegetation has been happening quickly near the Brunette since the company was given the go-ahead to cut, despite not having permits from City of Burnaby. Heavy machines destroyed the trunk of the thin tree this hummingbird was nesting in.

"I was very sad to discover this loss" says Sara Ross, co-founder of the Community Nest Finding Network (CNFN). "These tiny and fierce birds symbolize hope for many people and cultures. To witness nests being directly threatened and damaged by a tar sands expansion project - endorsed by the Trudeau government - is a disgrace." She continues, "This is the third nest that has disappeared. It is nesting season for birds, Trans Mountain should not be cutting any trees."

This was one of six positively-identified and documented hummingbird nests in the area, located on the western edge of intact and dense forest. Also in the vicinity is the Lost Creek tree sit, soon entering its 120th day. Just as the a tree-sit was established to stop clearcutting and construction of the TMX pipeline, many had hoped that the legally protected hummingbird nests would serve to delay construction. Only 4cm in diameter, finding hummingbird nests is not easy.

Under the Federal Migratory Bird Convention Act (MBCA), active birds nests are protected by law, and may not be damaged or threatened. There has been a 70% decline in bird populations in North America in the last 50 years.

"I was afraid her nest might be destroyed when we saw it on Thursday because Trans Mountain had enclosed it in a new Active Felling Area. Her nest tree had a very small buffer around it, only 3 metres on one side, marked with pink tape. I watched her mate enter the fresh clearcut and, because his usual perch had been cut, he sang from a song post now 2 feet off the ground. It was so sad."

On Friday, fearing the safety of the nesting mother and her unborn young, CNFN issued an urgent report to several authorities requesting an immediate halt to tree-cutting work in the area. The Federal Wildlife Officer responsible for ensuring federally-protected nests stay unharmed was contacted. As well, the Canadian Energy Regulator (CER) was notified, since it is responsible for monitoring and overseeing the work of Trans Mountain, including company compliance with environmental protection. At the time of press, the Wildlife Officer had not responded, nor the federal biologist on the hummingbird case. The CER told the group to notify the company. All the while, Trans Mountain continued cutting trees.

"This is why we are doing the work: because no one else is." says Ross. "This company puts up signs as if they want us to believe they actually are protecting nests. The buffer around a nest tree is supposed to be 30 metres, not 3. This is a continuation of poor and destructive practices on behalf of TMX."

Donna Clark, another nest finder, says, “We must also point out how outrageous it is that bird's nests are protected by federal law, and yet sovereign Indigenous nations are criminalized and arrested, often with excessive violence, when trying to protect their land. Ecocide and genocide are one and the same when it comes to fossil fuel extraction. The tar sands is the most destructive oil project on earth and the science is clear: this heavy crude must stay in the ground. Shame on Trudeau for this ongoing double-speak about climate leadership."