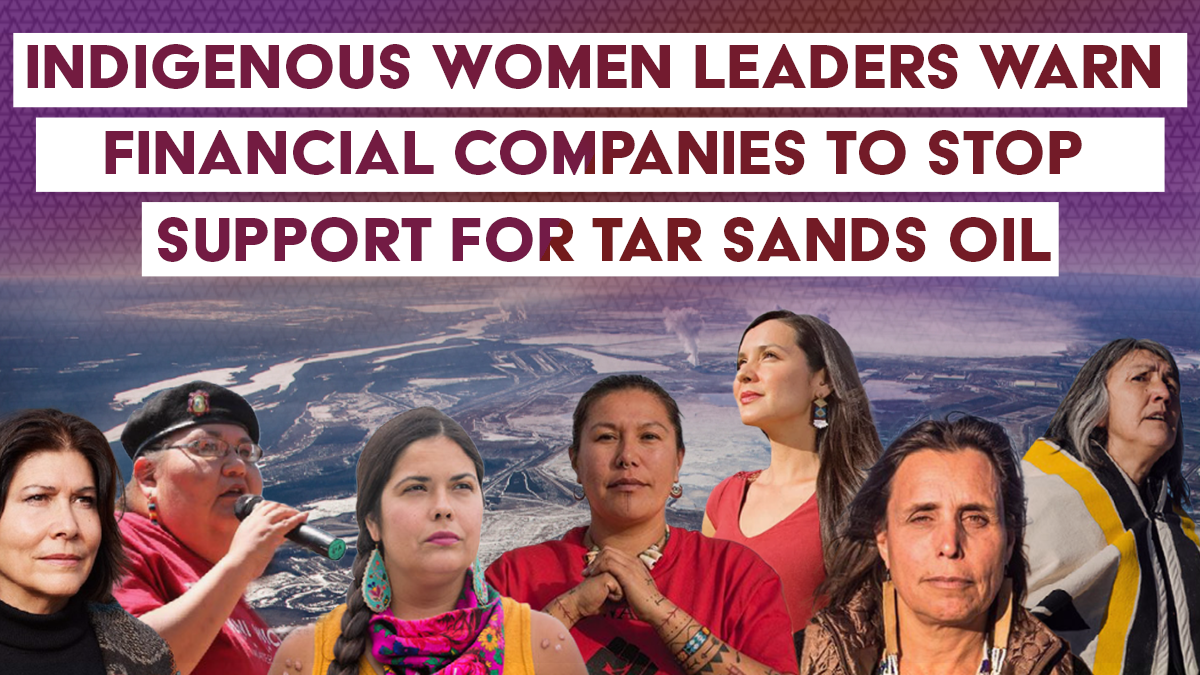 October 19, 2020 – This week, over 40 Indigenous women from communities impacted by tar sands sent an open letter to 70 major banks, insurers, and asset managers, calling on them to respect Indigenous rights and stop providing financial support for the industry destroying their homelands.

In a letter addressed to the CEOs of these global financial institutions, the women wrote: “With fossil fuel corporations plowing ahead with pipeline construction in the midst of a global pandemic and massive financial meltdown, we urge your institutions to immediately decline any additional support for TC Energy’s Keystone XL pipeline, Enbridge’s Line 3 pipeline, and the Canadian government’s Trans Mountain pipeline — and to cut ties with all tar sands projects and companies.”

The letter outlines the many risks and impacts that the fossil fuel industry, specifically tar sands, has caused in their communities. Construction for these pipeline expansion projects puts rural Indigenous communities at a higher risk for COVID exposure and sexual violence. The tar sands industry has devastated the northern communities through mining, extraction and refining.

This spring, the tar sands industry hit an all time low, producing barrels of oil at a loss. The signatories call on the finance industry to accelerate a just transition toward renewable, regenerative energy and away from this destructive fossil fuel for the sake of Indigenous Nations, women, communities, and workers that depend on the industry for their livelihoods.

“The land cries out for empathy, the people cry out for justice and both are met with silence. The tar sands industry is a tribute to human egoism and short-sighted benefit as the arboreal forest, the water, a multitude of ecosystems, and Black and Indigenous communities are sacrificed on the pyre of profiteering. As I see man camps appearing all over northern Minnesota to build Enbridge’s Line 3 tar sands pipeline, I call on the financiers to end their relationships with those who harm our people and land without a second thought. I call for action, not more empty words and promises,” said Tara Houska, Anishinaabe Land Defender and founder of Giniw Collective, living in a resistance camp next to the proposed Line 3 pipeline route.

"Social risk is now the number one risk facing the extractive industry. By failing to identify, manage and mitigate social risk competently corporate boards are leaving billions in stranded assets and facing significant material losses. They leave the investors with no choice but to divest,” said Rebecca Adamson (Cherokee), Founder of First Nations and First Peoples Worldwide.

“The truth is written in the blood and tears of our sisters that tar sands and the subsequent pipelines are nothing more than death knocking at our children's future. As Indigenous women we know the fear of looking into our daughter's eyes hoping and praying they won't go missing or murdered. These industries bring that fear to our doorstep. They bring death to our cultures and our children. They are nothing more than evil incarnate.  We must put a stop to them. We must stand and say enough is enough. Join us in saving our future. Join us putting the proverbial nail in the coffin of these dying unneeded industries,” said Joye Braun (Cheyenne River Sioux), organizer with Indigenous Environmental Network.

“Trans Mountain is misleading insurers by suggesting they have secured the land base and Indigenous consent for the Trans Mountain pipeline.  They do not have consent from the Secwepemc and failure to recognize Secwepemc title, land rights and indigenous jurisdiction, will only result in more conflict, direct actions, blockades and Indigenous land occupations which will increase the risks and economic uncertainty for Trans Mountain and its construction deadlines,” said Kanahus Freedom Manuel, Secwepemc land defender, who lives in the Tiny House Warriors village in the path of the pipelines.

“There is a direct link between oil extraction and violence against largely Indigenous women and girls, which serves as an important reminder: violence against the land begets violence against women. This is yet another reason, on a growing list, why the pipeline expansions should be shelved. Financiers have an opportunity to walk the path towards a cleaner, safer and more just world for all women, girls and Mother Nature alike,” said Melina Laboucan-Massimo (Lubicon Cree Nation), Founder of Sacred Earth Solar and Director of Healing Justice at Indigenous Climate Action.

"These fossil fuel corporations, what they have should be enough, but it is not enough for them, what they want is more, more, more, more; and that is what is destroying the planet and that is what is destroying everything. They set up a system that has become very corrupt and they try to cover up everything that they did wrong and still try to push forward. We have to do the protecting now, or else Mother Earth will fight back, and all of us will have to pay,” said Freda Huson (Unist'ot'en), Unist'ot'en Healing Centre, leader and spokesperson for the Unist’ot’en camps.

“It’s time to move on. The most destructive and expensive oil in the world needs to stay in the ground. As we look down the barrel of Line 3, we can say this will be known as the most expensive pipeline ever built,” said Winona LaDuke (White Earth Nation), Director of Honor the Earth, economist, and two time Vice Presidential Green Party candidate.

The letter was released in partnership with Giniw Collective, Rainforest Action Network, and Women’s Earth and Climate Action Network (WECAN). This letter and the signatories are supported by 160 Indigenous rights, environmental, and social justice organizations.