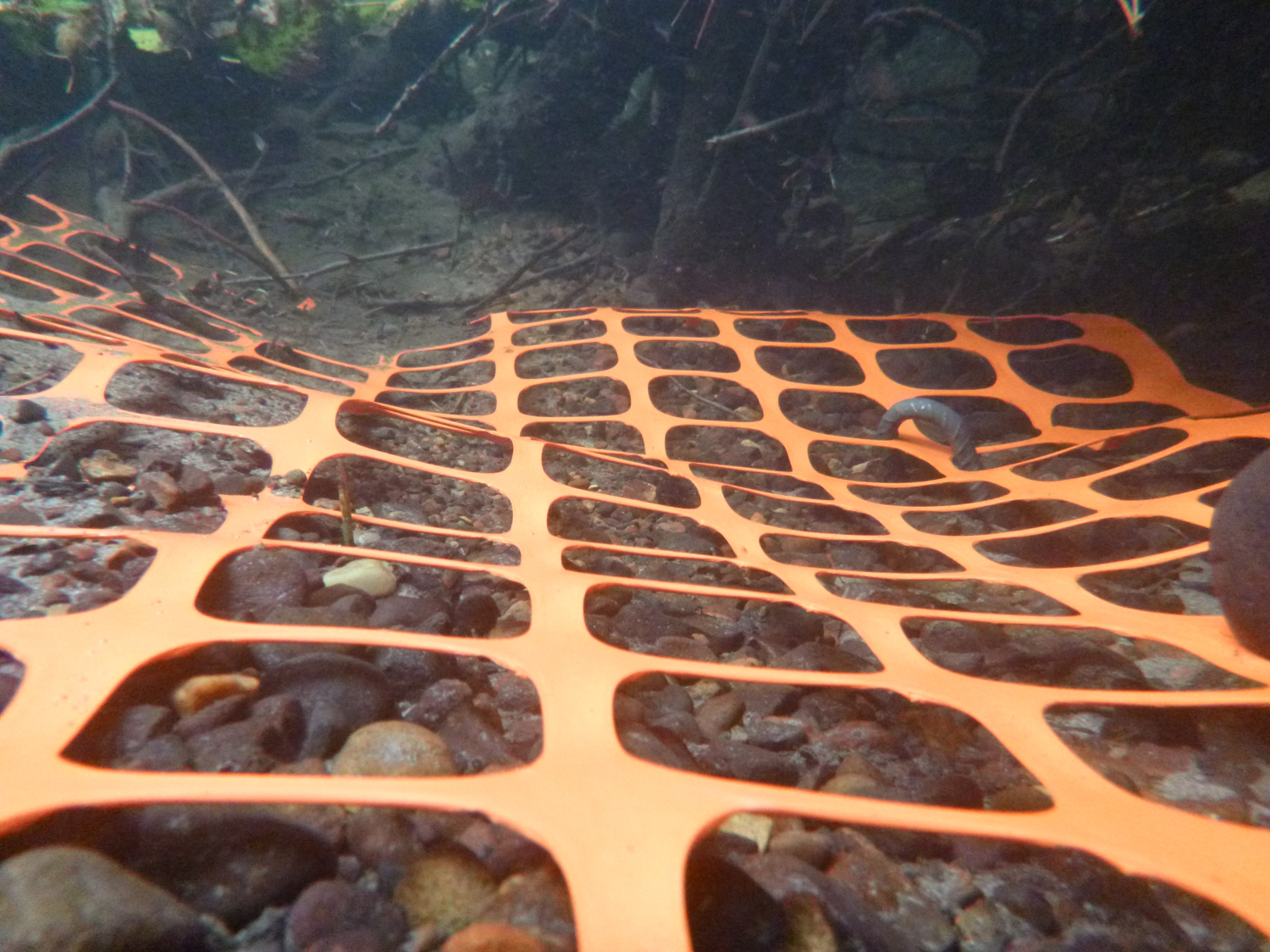 “Kinder Morgan prefers to ignore regulations that protect wild salmon and the environment from construction damage when it is inconvenient, and no wonder, when paltry fines like this are the only consequence. This sends a clear message to industry that breaking the law has no consequences, unlike the conscience-driven civil disobedience of Water Protectors who now face up to $5,000 fines for protesting the Trans Mountain pipeline and tanker project,” said one of the spokespeople for Protect the Inlet, the coalition that has been occupying the Watch House on Burnaby Mountain since March 10.

Last August, community watchdog Lynn Perrin discovered the salmon spawning construction violations after the company posted about it on their website, as there was seemingly zero oversight on the construction process. Subject to 157 conditions on approval by the NEB and the Cabinet, Kinder Morgan has applied for relief from permitting processes and jurisdictions multiple times, demonstrating its inability to comply with the most basic of construction guidelines.

Kinder Morgan was recently cited by the Department of Fisheries and Oceans in April for pile driving in Burrard Inlet at levels much louder than those permitted during construction. Construction exceeded noise rules multiple times from January to May and the company failed to report the violations as required at the time.

“Justin Trudeau may have bought this pipeline and tanker project with taxpayer money, but he has hired the same group of people who have flouted the rules protecting the environment at every turn to build it,” continued the spokesperson. “We simply cannot trust these people to abide by any guidelines on constructing this mega project. What is even worse is that this sends the message to potential every mega project builder that they can violate our rules with impunity for a tiny, if not insultingly small, fine.” 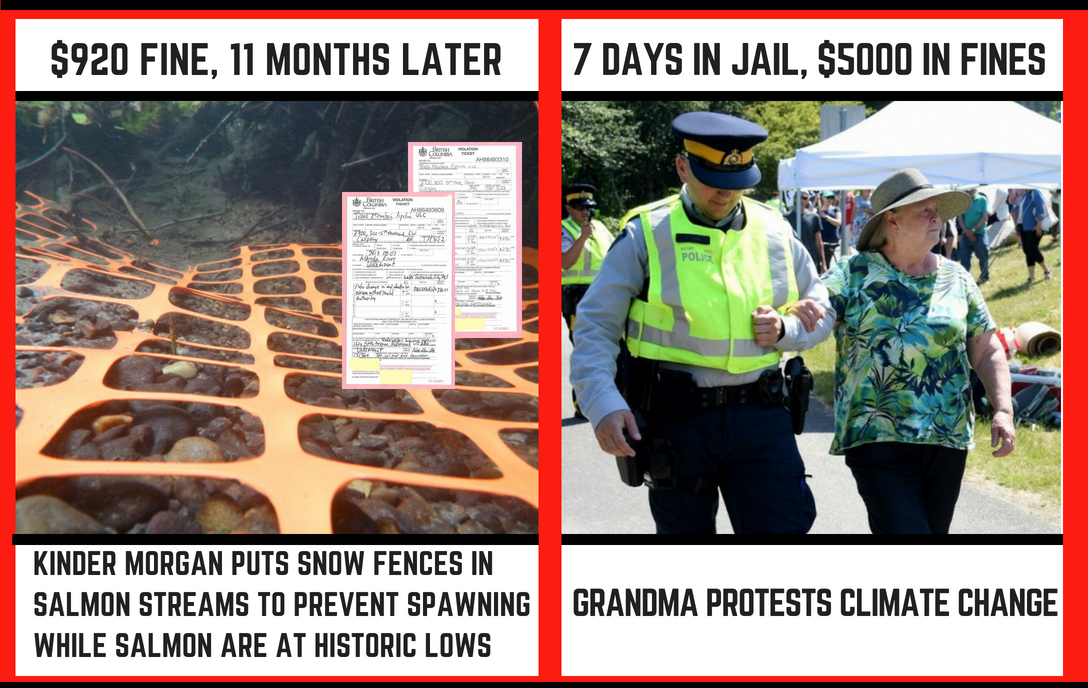 Kinder Morgan Fight Background: August 2017, community member Lynn Perrin of PIPE UP notices a blog post on Trans Mountain's website describing their "innovative" use of technology to prevent salmon from spawning in rivers so they could work outside the normal windows in place to protect salmon while spawning. After weeks of pestering them, the NEB "cracked down" and "issued a stern warning".

The National Energy Board has issued a stern warning to the company building a major west coast pipeline expansion about apparent violations of federal law.

The federal regulator called Kinder Morgan to task this week for installing mats in streams to discourage fish from spawning where the pipeline is to be built.

In a letter on its website, addressed to Kinder Morgan president Ian Anderson, the regulator ordered the company to stop installing the mats until it has obtained all approvals from the board to allow the start of construction in those areas.

The NEB said in that letter that the company's actions appeared to be in violation of the National Energy Board Act.

"The Board notes that numerous (construction) conditions... have not yet been approved by the Board which are required in advance of the commencement of construction on the pipeline portion of the project," said the letter, sent by the secretary of the Board, Sheri Young. "The Board reminds Trans Mountain that construction of the pipeline shall not be undertaken until such time that Trans Mountain receives the applicable approvals pursuant to those conditions."

The Trans Mountain project is an expansion of an existing pipeline route from Edmonton to Burnaby, B.C that would increase the amount of heavy oil shipments from Alberta's oilsands region to the west coast.

Oil producers and the business community say that Trans Mountain is essential for promoting jobs and growth in Canada's slumping oilpatch. Opponents say it will drive up Canada's greenhouse gas emissions and risk dangerous spills along its route or on coastal waters.

The Trudeau government approved the project last fall, arguing that it had struck a balance between economic growth and environmental protection.

In a blog dated Sept. 12 on the project website, Trans Mountain describes the "innovative use of snow fencing" in streams to protect spawning salmon and trout.

It says its biologists had temporarily laid plastic fencing on the bottom of some sections of five streams through mid-August 2017 in preparation for pipeline construction there in early 2018, adding it had identified a total of 26 streams in British Columbia and Alberta where the mats would be used prior to spawning season.

"By excluding fish from spawning in specific areas of a stream that may be within our proposed construction footprint, or immediately downstream within the zone-of-influence during construction activity, we then know we will not be disturbing redds or incubating eggs at the time of construction, if our construction timing will overlap with incubating eggs," said Trans Mountain fisheries biologist Calum Bonnington, in the company's blog.

In an email, Trans Mountain spokesman Ali Hounsell says the spawning deterrents were considered a "preventive measure" to minimize environmental impacts of construction, adding the company is working on a response to the NEB order.

"Kinder Morgan might be trying to impress their investors by jumping the gun on construction, but they should realize that community members are watching them all along the pipeline route and will continue to flag these kinds of preemptive strikes with governments and regulators," Stewart told National