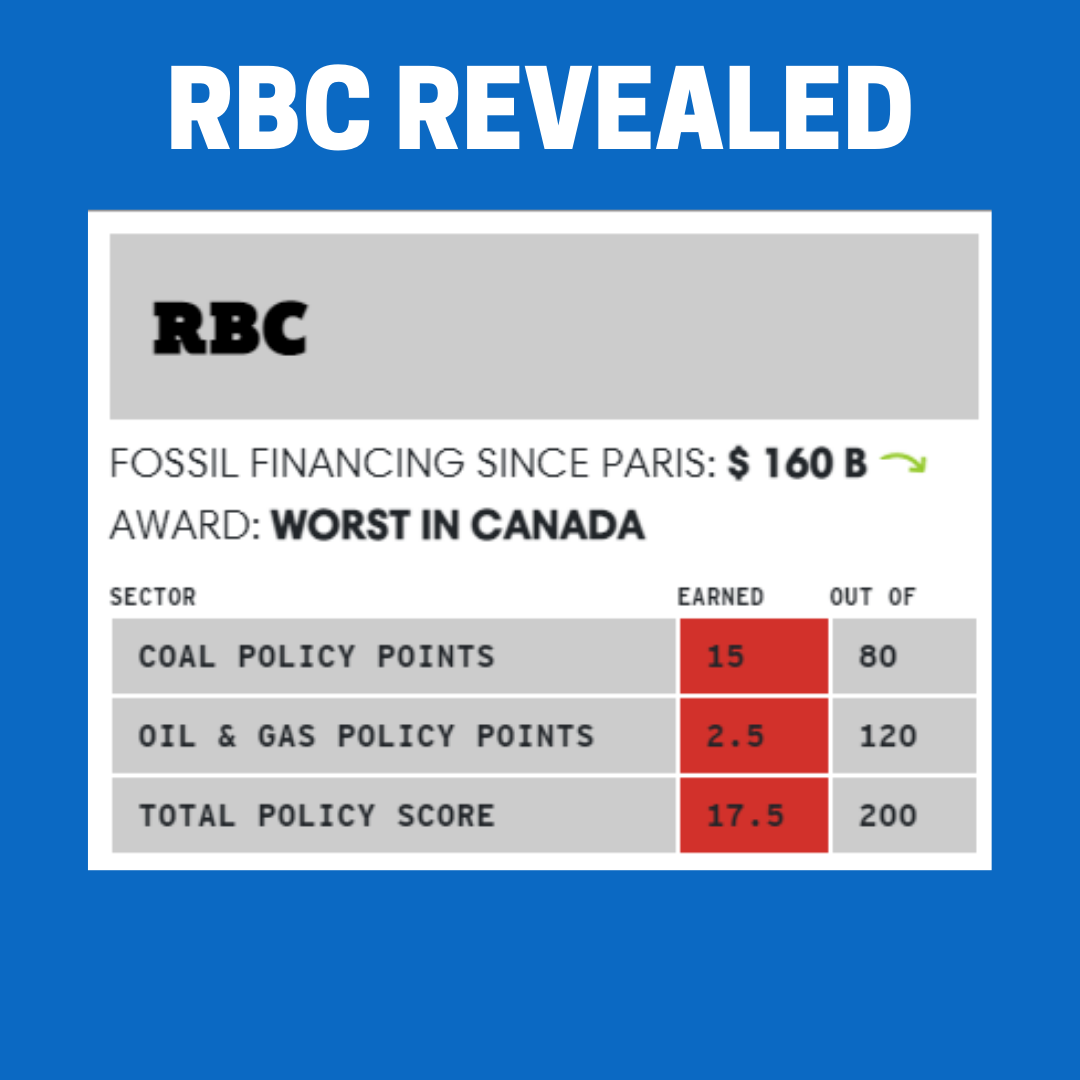 (March 24, 2001; Toronto, ON) Today a network of groups launched “RBC Revealed” to inform Canadians, investors, and shareholders about the misleading environmental claims of Canada’s largest bank, which continues to funnel billions into fossil fuels.

“By continuing to provide project-critical financing to projects such as Enbridge’s Line 3, RBC is directly trampling upon the rights of First Nations peoples that have been recognized and affirmed through the UN Declaration on the Rights of Indigenous Peoples, including that of Free, Prior and Informed Consent,” stated Kukpi7 Judy Wilson, Secretary-Treasurer of the Union of BC Indian Chiefs. “RBC must be accountable to their direct contributions to the endangerment of Indigenous Title and Rights, health, and welfare by immediately adopting the principle of FPIC and taking substantive action to stop funding industrial megaprojects that do not have Indigenous consent.”

The launch comes two weeks before RBC’s annual shareholder meeting and included a covid-safe visual demonstration - complete with mock oil barrels - outside the bank’s head office, a hard-hitting website, petitions to thousands of Canadians, and digital ads. The facts include:

In February, RBC pledged to reach net zero in financed emissions by 2050 and to raise its target for “sustainable finance.” But it set no short or medium-term targets that would reduce its fossil fuel financing on a meaningful timeline and defines “sustainable finance” to include fossil fuel companies like Enbridge – the Line 3 proponent.

“We youth are letting RBC and all the Big Banks know that we are watching them closely,” said Chloe Tse with Fridays for the Future Toronto. “The stakes are high: my future and that of my friends and family are on the line and Indigenous Rights are being violated. We cannot stand idly by as RBC pretends to care about climate change and human rights, all the while making destructive investments.”

Participating organizations in RBC Revealed include Below 2c, Climate Pledge Collective, Fridays for Future Toronto, Greenpeace, Leadnow North99, Ottawa 350, Quit RBC, Stand.earth, SumOfUs, Toronto 350, Union of BC Indian Chiefs, and Vancouver 350. As covid vaccinations ramp up, the organizations also expect to ramp up their pressure on RBC and its network of 1200 branches in Canada.

“Even global energy giants are writing off billions in oil and gas assets and investing in renewables,” said Cherry Tsoi, Senior Campaigner with Leadnow. “Banks like RBC are the last lifelines keeping destructive fossil fuel projects afloat. For us to have a chance at avoiding a climate crisis, RBC needs to step up to the plate and pull out of fossil fuels now.”

“RBC trying to erase its record as one of the largest fossil fuel financiers in the world by upping its sustainability investments is like eating an apple to negate a meal of donuts,” said Richard Brooks, Stand.earth’s Climate Finance Director. “It’s past time for Canada’s largest bank to kick its addiction to tar sands and coal and help truly build the green and just future we need.”