AUGUST 6, 2020 – Today, 140+ organizations representing 24 million people sent a letter to the current insurers of Trans Mountain, urging them to stop insuring the tar sands pipeline due to its contribution to climate change, Indigenous rights violations, and environmental justice concerns.

Indigenous leaders and Nations, climate justice groups, community organizations, and a physicians’ association call on these companies, which include Liberty Mutual, Chubb and AIG, to drop their coverage of Trans Mountain and stop insuring all tar sands expansion. 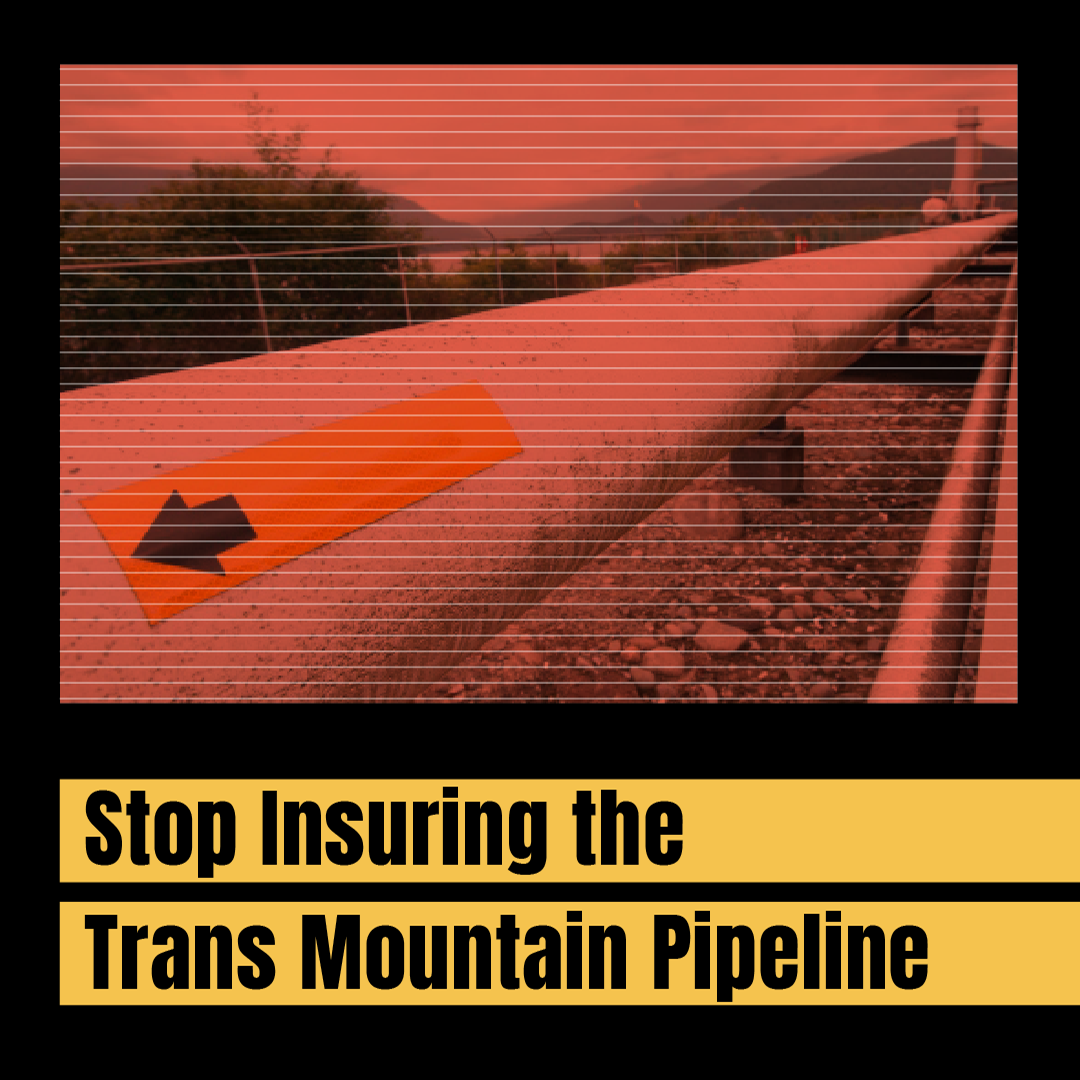 “The companies insuring the Trans Mountain pipeline are accelerating climate change and violating Indigenous Rights,” said Grand Chief Stewart Phillip, President, Union of BC Indian Chiefs (UBCIC). “Now is not the time to finance a huge expansion of some of the world’s dirtiest oil. The pipeline does not have the Free, Prior and Informed Consent of all Indigenous communities across whose lands this pipeline passes.”

Kanahus Manuel, Secwepemc, Ktunaxa, Tiny House Warriors, said, “It’s the blood and bones of our ancestors that make up the soil that we’re standing on. It’s part of who we are and our identity. Oil and gas pipelines are not welcome on Unceded Indigenous Territories.”

Insurance coverage of more than USD $500 million for the Trans Mountain pipeline expires on August 31, 2020. The insurers on track to renew their coverage include AIG, Chubb, Energy Insurance Limited, Liberty Mutual, Lloyd’s, Starr, Stewart Specialty Risk Underwriting, and W.R. Berkley. They all received copies of the letter.

Trans Mountain recently revealed that its lead insurer, Zurich, would not be renewing its policy. Earlier in the summer, German insurers Talanx also stated that it would drop the project following a recently-adopted policy on oil sands. Fellow German insurer Munich Re signaled the same.

“The world is changing, the financial sector is beginning to act on climate change and projects that drive it. Recently we have seen Deutsche Bank announce they will no longer invest in the oil sands and Zurich Insurance cut its ties to Trans Mountain. Now it is time for companies like Liberty Mutual and Chubb to catch up to their peers by adopting strong climate policies that rule out the dirtiest forms of fossil fuels and the projects that support them, starting with this pipeline” said Sven Biggs, Canadian Oil and Gas Program Director for Stand.earth.

These divestment decisions follow pressure from a global coalition that has been targeting insurers to cut ties with Trans Mountain and the entire tar sands sector. The campaign is now turning to the pipeline’s remaining insurers.

“Over 100,000 SumOfUs members called on insurance companies like Zurich, Talanx, and Munich Re – and are pleased that the companies have stopped underwriting destructive projects like the Trans Mountain pipeline. In addition, thousands of our members have written to Swiss based-Chubb CEO and executives in German, French and English to join its competitors and not renew its insurance on Trans Mountain. Chubb was an industry leader as one of the first insurance companies to stop working with coal, and we are hopeful that it will do the right thing with dirty tar sands pipelines as well,” said Angus Wong, Canadian Team Leader at SumOfUs.org.

The Trans Mountain pipeline is a major environmental and public health hazard with a long history of disastrous spills. The expansion project (TMX) would triple its output of tar sands oil to 870,000 barrels per day, increasing the number of oil tankers that traverse the BC and Washington coasts and risks of major spills of diluted bitumen.

"The transport of crude oil through waterways and communities in Washington poses unacceptable health risks to the public. Prone to spills, fires, and explosions, crude oil transportation and storage carries a high potential to cause injuries and deaths in population centers. Exposure during spill and cleanup also increases the risk of neurotoxicity, cancer, lung disease, loss of cognitive function, and endocrine disruption in humans. Crude oil accounts for the majority of air-toxic cancer risks in the Puget Sound area and oil-contaminated water sources are strongly associated with cancer, digestive, and reproductive health risks. For the health of our communities, we cannot afford to bring more dangerous and dirty crude oil into our state,” said Mary Margaret Thomas, RN, MSN, Washington Physicians for Social Responsibility.