Trans Mountain Must Take Down Fence in Burrard Inlet, City of Burnaby 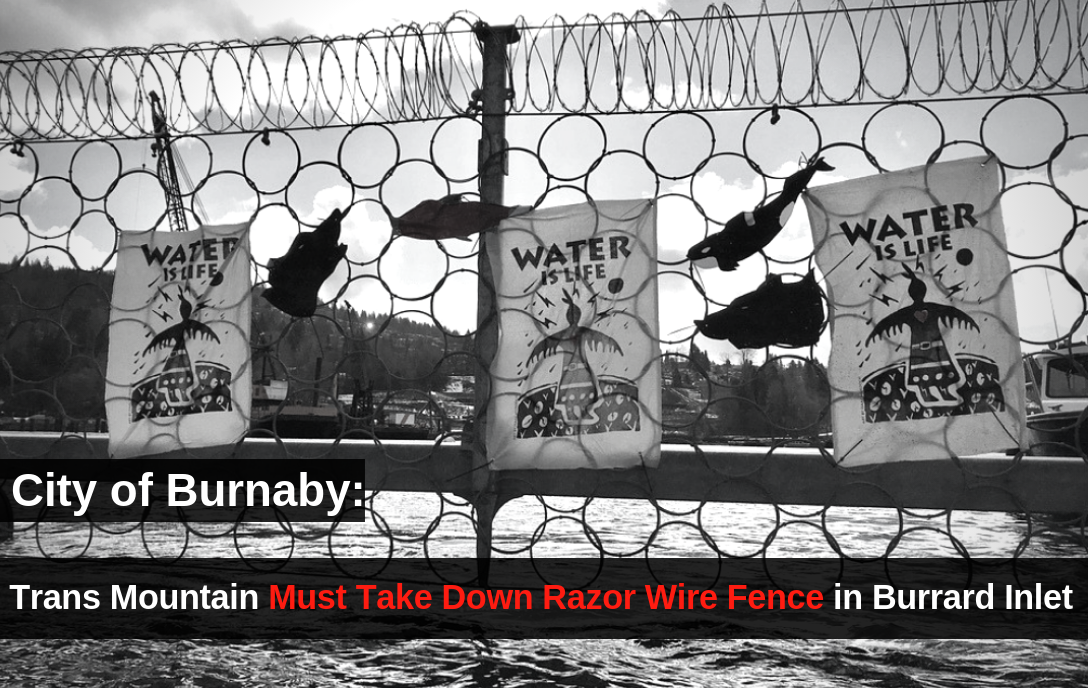 5 October 2018, Coast Salish territory (Burnaby, BC) Trans Mountain Corporation must take down the fences in Burrard Inlet, says the City of Burnaby in a submission to the Vancouver Fraser Port Authority. The fence is attached to a floating boom at Kinder Morgan's Westridge Marine Terminal in Burnaby. Now that the Federal Court of Appeal has quashed the approval to build the pipeline and tanker project the fence must come down, argues Burnaby counsel Gregory McDade in a recent filing. [Full text below]

"Now that construction authorization has been withdrawn by the court, we ask that you immediately notify Trans Mountain that the fence must be removed as an obstacle to public access."

The City is petitioning the Vancouver Fraser Port Authority to withdraw Trans Mountain's permit to operate the "Marine Construction Safety Boom" around the perimeter of the (former Kinder Morgan and now) government of Canada-owned tanker berth construction site. The permit to triple the number of berths at the terminal was dependent on the overall approval of the project, Burnaby argues, and now that the general approval has been quashed, so too should be the razor wire fence permit.

Citizen watchdogs at the tank farm report have documented increased construction activity at the Burnaby tank farm in recent days, sharing it on social media. Burnaby's challenge to the Port is the first real test of the new Trans Mountain Crown Corporation's intentions of obeying the stop work order set down August 30 by the Federal Court of Appeal, in a ruling the federal government decided this week not to appeal.

We are legal counsel for the City of Burnaby.

On August 28, 2017, the Vancouver Fraser Port Authority granted Project Permit PER 15-322 to authorize the construction of the Marine Terminal and related matters in respect of the Trans Mountain pipeline. The approval of this Permit was explicitly based upon the prior grant of the Certificate of Public Convenience and Necessity for TMEP by the Governor-in-Council (December 1, 2016) pursuant to s. 52 of the National Energy Board. The CPCN and the NEB decision on which it was based became a
condition of the Permit (condition #5).

The environmental review by the VFPA -- as set out in the VFPA Project and Environmental Review Report (dated August 23, 2017) -- specifically relied upon the finding by the NEB that TMEP was “not likely to cause significant adverse environmental effects”, and based upon the grant by the Governor in Council of the CPCN. The VFPA Report states:

On August 30, 2018 the Federal Court of Appeal, in Tsleil-Waututh Nation v. Canada (AG), 2018 FCA 153, quashed the Order in Council and determined that the Certificate of Public Convenience and Necessity approving the construction and operation of the project was “a nullity”.

In its judgment, the Federal Court of Appeal found (at para 766):

“The unjustified failure to assess the effects of Project-related shipping under the Canadian Environmental Assessment Act, 2012 and the resulting flawed conclusion about the environmental effects of the Project was critical to the decision of the Governor in Council. With such a flawed report before it, the Governor in Council could not legally make the kind of assessment of the Project’s environmental effects and the public interest that the legislation
requires.” (emphasis added)

It is explicitly a condition of the Permit that the VFPA may cancel its authorization for the Project based
upon changes to the Project or new information.

The cancelation of the CPCN, and the finding by the Federal Court of Appeal that the NEB and GIC assessment of environmental effects and the public interest was flawed undermines the basis of the VFPA Project approval, and constitutes new information.

We also observe that the Permit 15-322 constituted the authorization to install and maintain a Marine Construction Safety Boom around the perimeter. This Permit is the necessary justification for construction of the fence which continues to preclude public access to the area without lawful authority.

Now that construction authorization has been withdrawn by the court, we ask that you immediately notify Trans Mountain that the fence must be removed as an obstacle to public access. 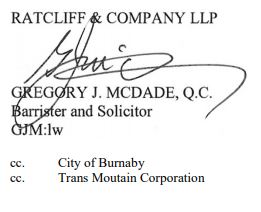