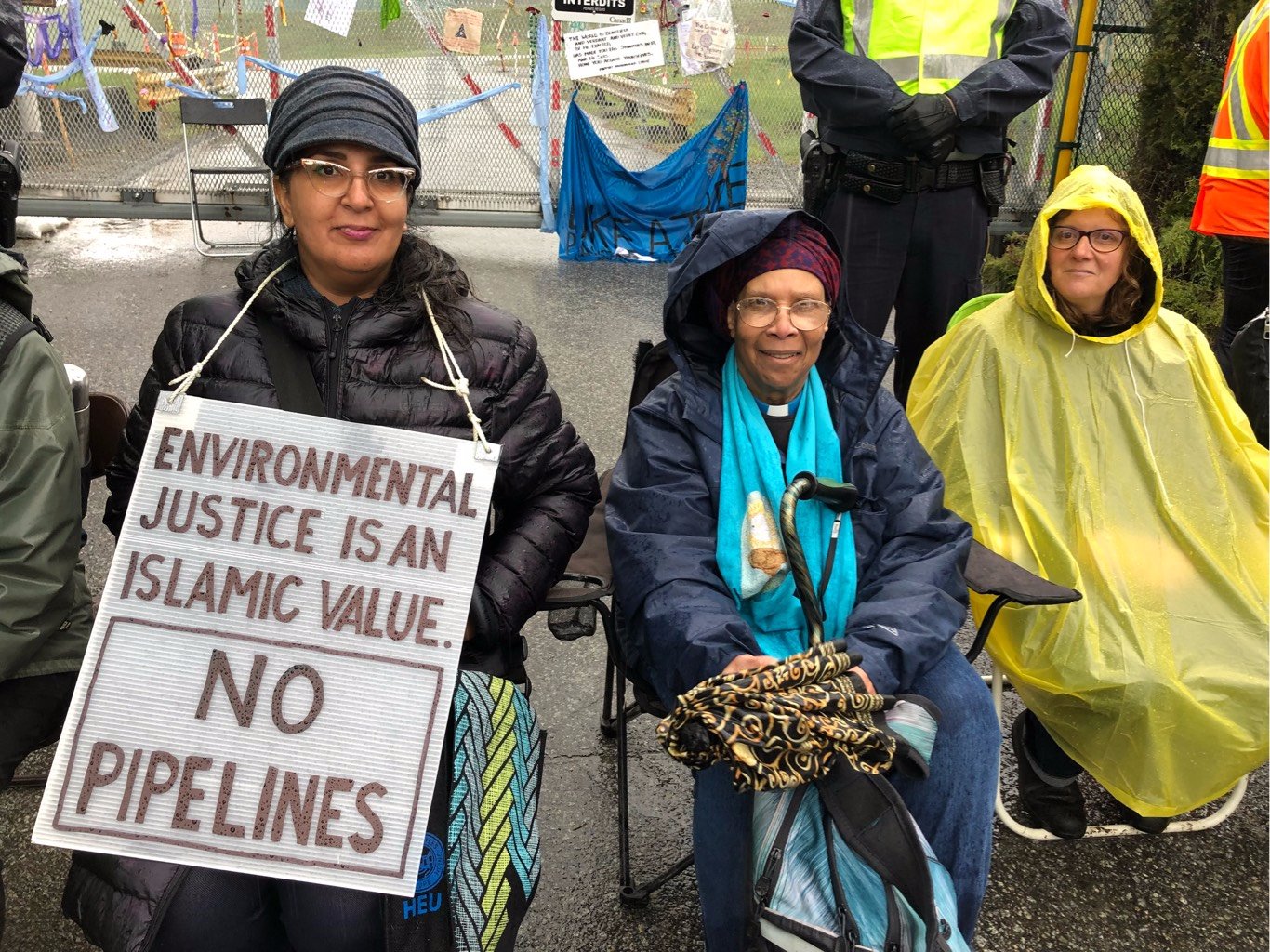 "We have a spiritual obligation to care for the land and uphold the truth and reconciliation calls to action."

28 April, 2018, Unceded Coast Salish Territories (Burnaby, BC) — Religious leaders and more than 100 members of diverse faith communities joined the protest against the expansion of the Kinder Morgan Trans Mountain Pipeline in Burnaby on Saturday, joining more than 200 people who have been arrested blocking Kinder Morgan's Burnaby tank farm gates since March 10th.

On Saturday in the pouring rain, faith and spirit leaders from Muslim, Buddhist, Jewish, Hindu, Unitarian, Christian, and interfaith communities gathered on Burnaby Mountain at Kwekwecnewtxw - the Watch House before marching to the front gates of Kinder Morgan’s Burnaby Mountain tank farm. There they peacefully sang, prayed, led ceremonies, hung prayer flags and rosaries at the gates and blocked access to the construction site.

Reverend Laurel Dykstra of the Salal + Cedar Watershed Ministry, who helped organize the event, said at the Kinder Morgan gates: “We are here as faith leaders in solidarity with Indigenous people, answering a call from members of Tsleil-Waututh, from spiritual leaders at the Watch House because they have called us to make real our commitment to reconciliation; to make real our commitment the United Nations Declaration on the Rights of Indigenous People.”

“This pipeline will not be built,” added Rev. Dykstra.

"We are here today to ritualize resistance. As a Muslim, I stand in solidarity with Indigenous people in meaningful and intentional ways and take leadership from them," said Amal Rama of the Interfaith Institute for Justice, Peace and Social Movements, an anti-racist, anti-colonial collective. 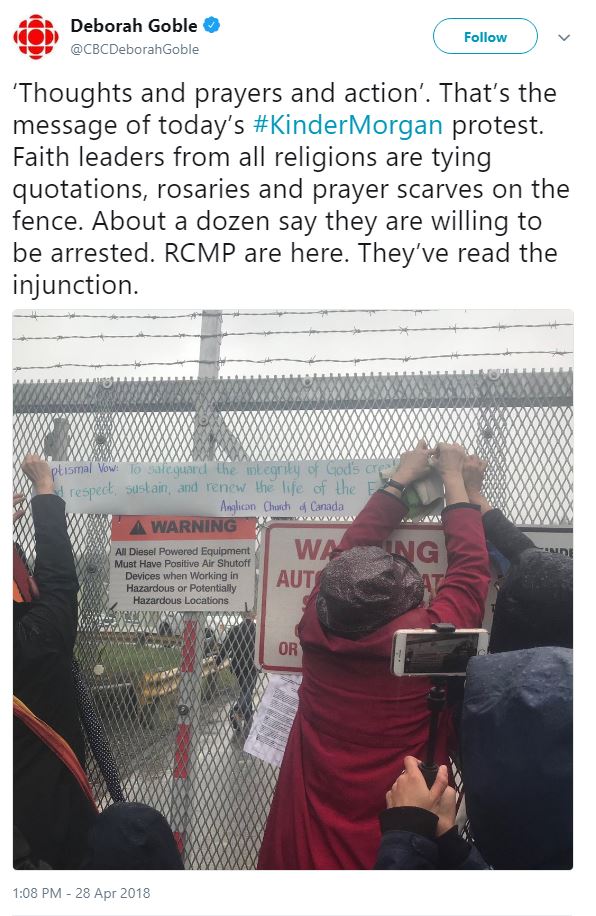 Bat-Ami Hensen, a member of the Jewish faith community in Victoria, explained that she attended to uphold the calls to action from the Truth and Reconciliation Commission, as well as honour her faith: “In our Torah it says, ‘Justice, Justice shall you pursue’ and we’re told that the reason justice is repeated twice is because it’s not just for ourselves, but for others.”

You can contribute to the legal fund for protectors here: 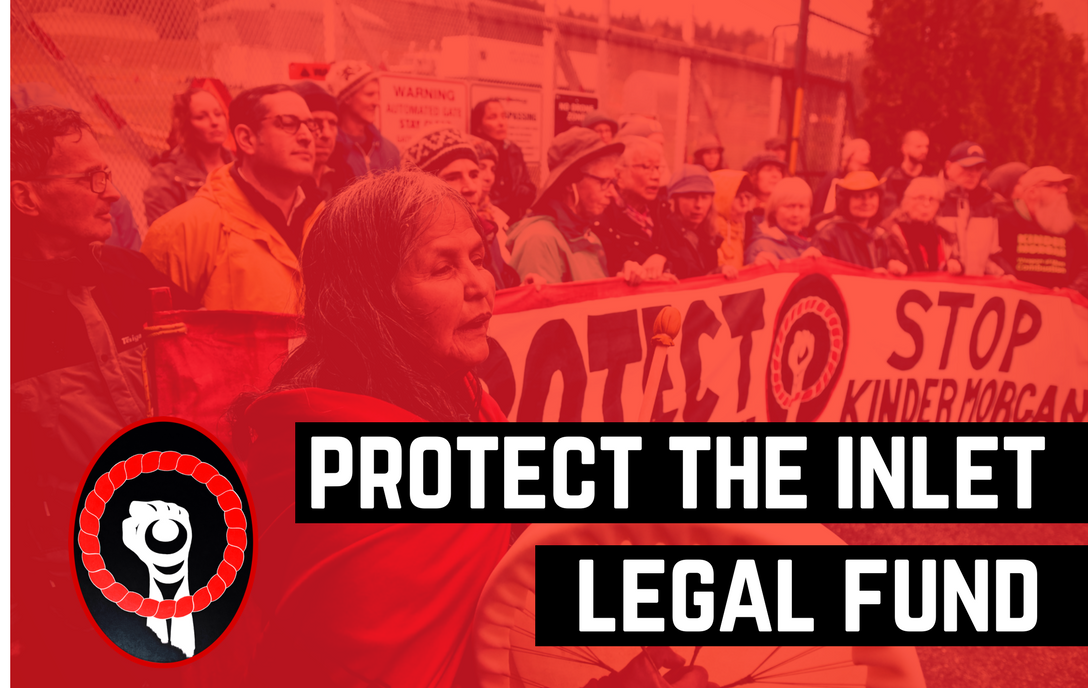 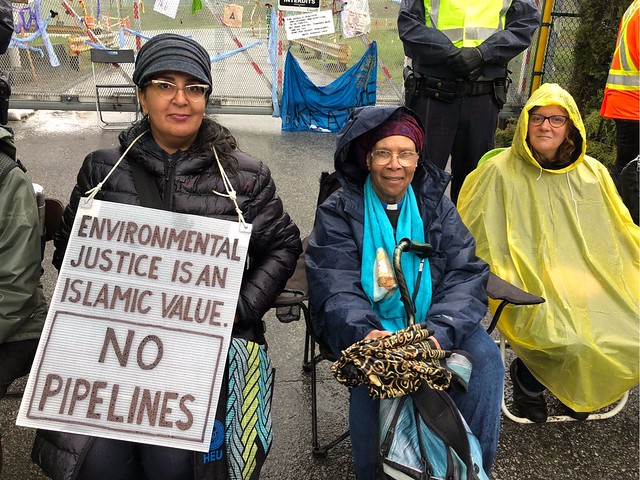