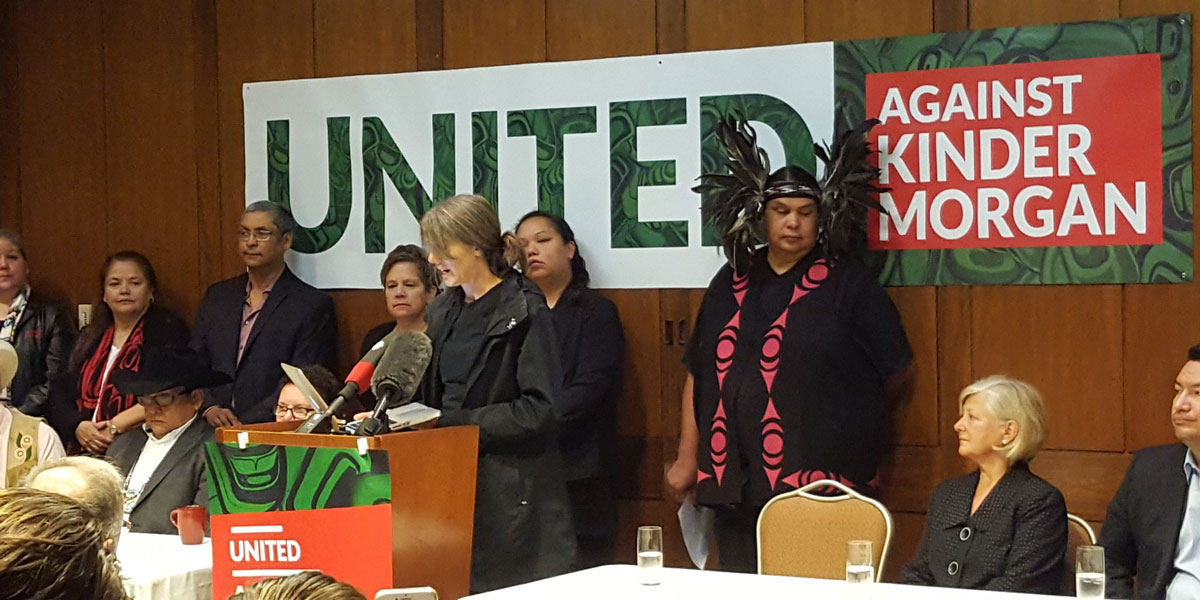 The Nations of the Tseil-Waututh, Squamish, Sto:lo, Secwepemc, Coldwater and Upper Nicola Band, Raincoast Conservation Foundation, Living Oceans Society, the cities of Vancouver and Burnaby, and the Province of British Columbia are part of a consolidated lawsuit to stop the Trans Mountain pipeline and tanker project. The verdict could quash the federal approval of the project like the 2016 Enbridge decision that killed Enbridge's Northern Gateway.

Thursday's verdicts are part of a long struggle to win Indigenous rights in the Canadian courts, in brief:

November 2010, Canada issued a Statement of Support endorsing the principles of the United Nations Declaration on the Rights of Indigenous Peoples. In November 2015, the Prime Minister of Canada asked the Minister of Indigenous and Northern Affairs and other ministers, in the mandate letters, to implement the declaration.

In May 2016, the Minister of Indigenous and Northern Affairs announced Canada was now a full supporter, without qualification, of the declaration.

In May, West Coast Environmental Law released a detailed outline of the issues at stake at the Federal Court of Appeal. Read them here and here.

“Seven [later six] First Nations filed ten legal challenges which assert many of the procedural and substantive errors above, and also challenge the adequacy of the NEB’s review with respect to each Nation’s unique circumstances and interests, in particular regarding impacts on their Aboriginal Rights and Title. This is a separate issue from assertions of flawed consultation leading up to the Cabinet approval.

Raincoast Conservation Foundation and Living Oceans Society (represented by our friends at Ecojustice) argue, among other things, that the NEB and Cabinet failed to uphold the Species at Risk Act with respect to endangered southern resident orca whales, despite finding significant adverse effects to those orcas.

The Cities of Vancouver and Burnaby argue, among other things, that the NEB process failed to consider alternatives to the project, and that it breached a duty of procedural fairness, didn’t adequately test evidence, and provided insufficient reasons for its recommendation. As a result, they say the NEB was unable to understand the risks associated with the project, the brunt of which will be disproportionately borne by the cities.”

“It is important to note that each First Nation’s legal challenge is based on unique facts relating to its specific territory, rights and title. This raises an independent duty to consult and accommodate each individual First Nation. In other words, the extent and content of consultation is specific to the facts and circumstances for each First Nation, and satisfying the duty to consult and accommodate one First Nation does not guarantee that the duty has been fulfilled for another. Success on any one of the First Nations’ (or other parties) legal challenges could delay or stop the project.

The legal challenges submitted by First Nations highlight issues of constitutional, administrative, procedural and statutory law. They allege, among other issues:

“So what could the court do? Here are the range of outcomes from the FCA cases.

Note: these are not ranked for likelihood – don’t believe any lawyer who tells you they know what any court will decide before the decision comes out.

1. Appeal allowed: Cabinet decision quashed (cancelled) because NEB process was flawed and not corrected, and consultation was not meaningful.

In this scenario, the court would agree that some or all of the legal errors argued by applicants were legitimate and not corrected by Cabinet, and that consultation with one or more of the First Nations was inadequate. This would send the decision back to the federal government to correct the legal errors and to re-engage in consultation. It could mean that the project review gets sent back to the National Energy Board (NEB) or Canadian Environmental Assessment Agency, and additional meaningful consultation and accommodation with First Nations happens.

The primary argument about consultation by First Nations was that it was not a two-way street, and that government approached consultation with their minds already made up while saying that a decision had not yet been made. If this argument is upheld, then the future consultation would have to ‘reset’ completely – not just be a longer, more expensive process without any meaningful accommodation.

As the court said in Gitxaala Nation v. Canada (the case that overturned the Enbridge Northern Gateway project), Cabinet would have to make a fresh decision. By looking at the matter afresh, deficiencies identified in the previous process could result in additional conditions or process, or even a rejection of the project

2. Appeal allowed: Cabinet decision quashed due to flawed consultation, but NEB process and other legal errors were OK, or are not reviewable.

Here, the court would find that the NEB process was not reviewable, since it wasn’t the final decision, (or that the legal errors alleged are OK) but that the federal government’s duty to consult was not met for any one of the six First Nations.

As we have written before, in Canadian law, each nation has an independent right to be consulted at a level consistent with their strength of claim and impact of the project on their inherent rights. That means that a finding of adequate consultation for one or several First Nations does not guarantee that it would be found for all First Nations.

If the court were to find that the consultation did not meet the standard in Canadian law (‘upholding the honour of the Crown’), they might offer direction on how Cabinet could correct those errors. Like in Gitxaala, it would then be up to the federal government to reopen its consultation process and make any accommodation measures that arose from that consultation. These measures could include a route change, risk mitigation measures, compensation infringing on rights and title, or rejecting the project.

In Gitxaala, the FCA stated that the federal Cabinet would have to make a fresh decision, and had three options: (1) direct the NEB to reconsider the recommendation and correct errors; (2) direct the NEB to add terms and conditions that corrected the errors; or (3) direct the NEB to dismiss Kinder Morgan’s application. The court was clear to state that the fresh redetermination could only happen after the duty to consult, accommodate and seek consent from Aboriginal peoples had been fulfilled.

3. Appeal allowed: Cabinet decision quashed because of statutory errors by the NEB or Cabinet

Here, the court would find that the statutory errors by the NEB (i.e. excluding marine shipping from the review, issues with procedural fairness, failure to implement the Species at Risk Act (SARA), failure to issue adequate reasons etc.) were not corrected by the Cabinet when they made their decision – and the Cabinet decision is therefore quashed.

It is possible that if the court found this error upfront, it would not rule on the consultation question, and just send the decision back to Cabinet to correct the statutory errors. The correction would depend on which of the several alleged errors the court agreed with, and which body (NEB, Canadian Environmental Assessment Agency, Cabinet or other) could correct those errors, as set out above.

4. Appeal allowed: Cabinet decision quashed because even though consultation was meaningful, infringement of confirmed rights was not justified

Here, the court might find that the federal government met the standard for the duty to consult, but failed to justify the infringement of established Aboriginal rights – specifically the Sto:lo applicant’s rights following the VanDerPeet decision, which confirmed an Aboriginal right to fish for Sto:lo. As with Gitxaala, using a similar approach for all affected First Nations could be a fatal flaw, given the project’s different impacts on each nation’s rights.

The court might order the federal government to engage in more meaningful discussion with the rights holders, and either justify or compensate for the infringement of rights (or a combination of both), or failing that, reject the project altogether based on an unjustified infringement of rights.

5. Appeal dismissed: Consultation was meaningful and the NEB process was fine

In this scenario, the court would have to find that consultation for each of the six First Nations challenging the NEB and Cabinet decisions was meaningful, and that there were no additional legal errors made (i.e. the decision and process followed applicable legislation and common law). In other words, Canada, Kinder Morgan, and the NEB would combine for a 1.00 save percentage, to use a hockey analogy (or 1.00 batting average in baseball). In this case, the Cabinet decision would stand and the approvals would remain in place.

6. Appeal dismissed: the NEB process was flawed, but consultation was meaningful

Here, the court agrees the NEB made one, several or all of the statutory errors that the applicants complain about in the NEB process. But despite these errors, the court finds that the consultation efforts by the federal government were meaningful, and declines to quash the Cabinet decision.

It is possible that the court orders additional work to correct the NEB’s legal errors. For example, it could direct Cabinet to re-do the marine shipping review under the Canadian Environmental Assessment Act, 2012, or to come up with a recovery plan for southern resident orcas consistent with SARA, while maintaining the Cabinet decision.

7. Appeal dismissed: the NEB process was flawed and there were flaws in consultation, but since consultation is reviewed on a ‘reasonableness’ standard, Cabinet decision is upheld

Here, the court could say something like: “While Canada’s consultation could have been better, the law does not require that Canada undertake perfect consultation – only that its consultation be reasonable…in the circumstances of this complicated project, Canada met that standard.”

The court may even identify specific things Canada could have done better, and note that there will be future opportunities to address concerns, despite dismissing the judicial reviews. This is known as the dreaded ‘future consultation’ argument. In this case, the Cabinet decision would remain in place.