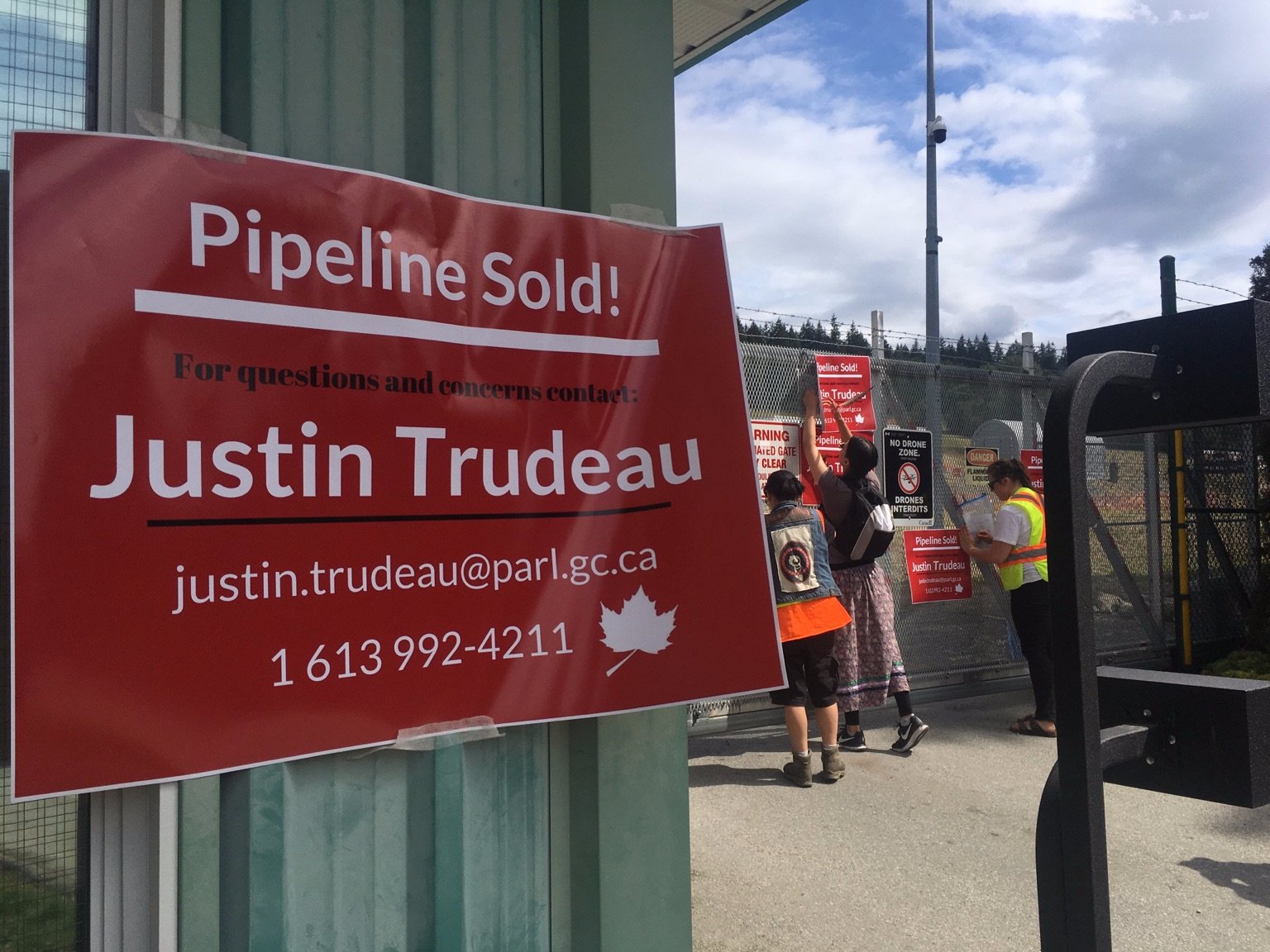 “We stopped Kinder Morgan and its investors, we will stop this buyout as well.”

2 June, 2018, Unceded Coast Salish Territories (Burnaby, BC) — Indigenous leaders and hundreds of supporters marched to the gates of Kinder Morgan’s tank farm on Burnaby Mountain this morning to “rebrand” signage to reflect the Trudeau government’s recent announcement it will purchase the troubled pipeline and project.

“Here on Coast Salish land, this resistance is getting bigger and stronger. The people are standing up. This is more than a pipeline issue. This is an issue of how the Canadian government treats First Nations and local communities,” said Tsleil-Waututh and Tulalip member Cedar Parker-George, grandson of elder Ta’ah Amy George, as he fastened a sign emblazoned with “Pipeline Sold! For questions and comments, call Justin Trudeau” to the tank farm gates.

On Monday, more than 75 events are planned at MP offices across the country for a National Day of Action to stop the Kinder Morgan buyout.

“As we gather here today on the frontlines, people are organizing in 75 cities across Canada to show their MPs the widespread opposition to this pipeline. People feel betrayed by the Trudeau government’s decision to use billions of taxpayers’ dollars and ignore Indigenous rights, community safety and the climate,” said Tzeporah Berman, who spoke on Tuesday’s rally in Vancouver at Science World that saw thousands of people some together in a snap reaction rally to the buyout announcement. “We stopped Kinder Morgan and its investors, we will stop this buyout as well.”

More than 200 people have been arrested since March defending the water, land, and climate from Kinder Morgan’s export-only toxic diluted bitumen pipeline and tanker project. Indigenous leaders and grassroots organizers expect that number to grow exponentially if the federal government attempts to begin construction this summer. Outrage at the federal decision has spurred urgency among residents to take direct action against the tar sands project, with over 25,000 people pledging to do “whatever it takes” to stop the pipeline.