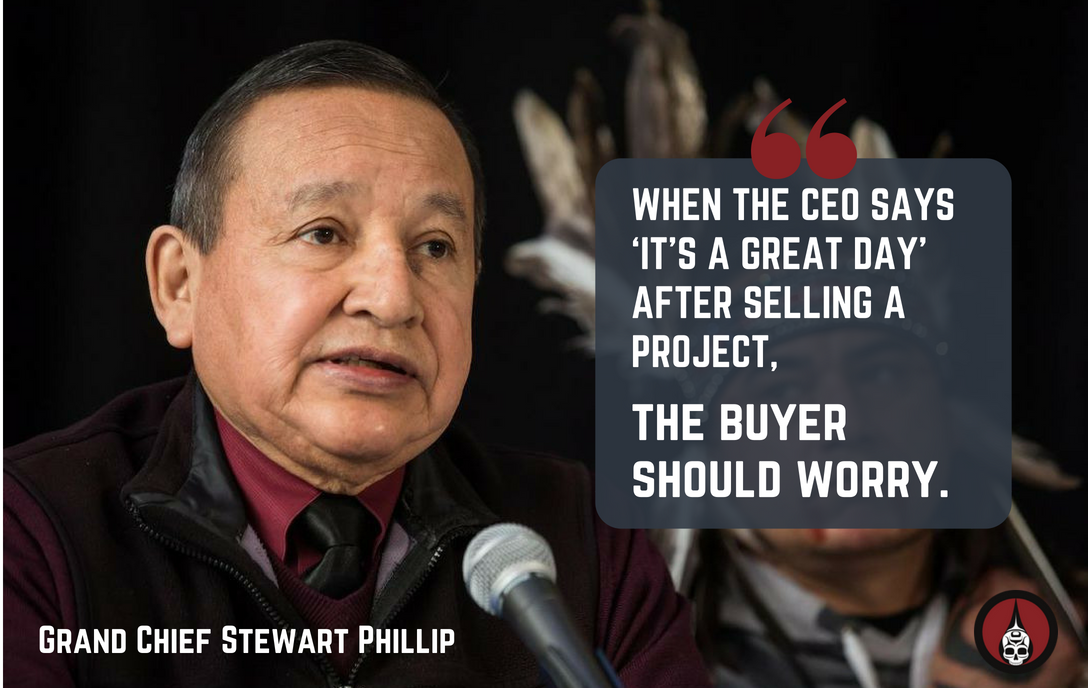 (Coast Salish Territory/Vancouver, B.C. – May 29, 2018) Indigenous leaders are standing firm in their opposition to the Trans Mountain pipeline and tanker project after federal finance minister Bill Morneau announced this morning that Canada has reached an agreement in principle with Kinder Morgan to purchase the troubled project for $4.5 billion, plus unspecified construction costs.

Grand Chief Stewart Phillip, President of the Union of BC Indian Chiefs (UBCIC), stated “We are absolutely shocked and appalled that Canada is willingly investing taxpayers’ money in such a highly controversial fossil fuel expansion project so risky that a major resource company has walked away and there are no known buyers lined up. No means no – the project does not have the consent it requires, and we will not stand down no matter who buys this ill-fated and exorbitantly priced pipeline. When the CEO says ‘it’s a great day’ after selling a project, the buyer should worry.”

Chief Bob Chamberlin, Vice-President of the UBCIC, warned this morning that a federal government buyout will not succeed in forcing the pipeline and tanker project on the people of British Columbia. He stated, “We have a new owner of the pipeline, but the fight, the opposition, and the risks, do not change. As climate chaos intensifies, Canada is doubling down on fossil fuels while the world moves on to renewables.  Trudeau and his Liberal government were elected on their commitments to protect the environment and to respect and uphold Indigenous rights. Choosing to buy the pipeline is a direct contradiction of these commitments and is not in the national interest – it is in the interest of oil producers.”

Chief Judy Wilson, Secretary-Treasurer of the UBCIC, concluded, “Our collective resolve to stop this project is strengthened.  Canada is offering shiny trinkets of diluted bitumen, and we will not be bought off.  No amount of money will change our mind. Today at 5:30 p.m. PST, we will be joining allies in a rally at Science World, Vancouver, to stop the Kinder Morgan bailout.  We invite everyone opposed to this dinosaur of a project to join us.”