No Consent from Secwepemc: Trans Mountain is a warning that investors can no longer ignore Indigenous rights 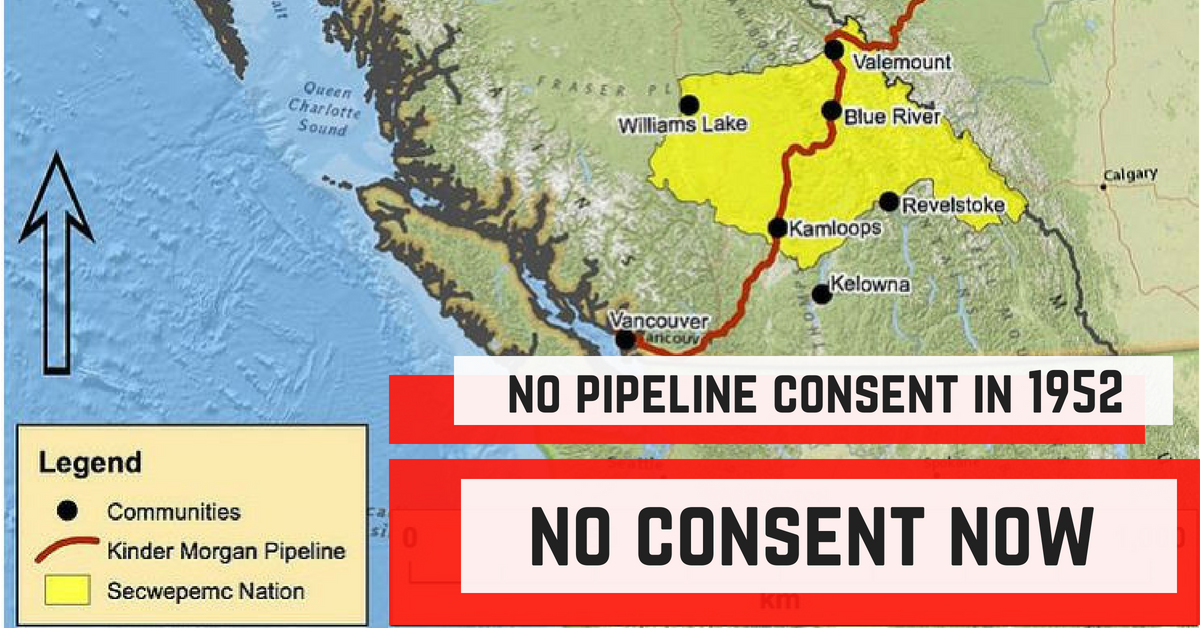 (Via the Ottawa Citizen)

In November, 2016, the late Secwepemc leader Arthur Manuel wrote a letter to Prime Minister Justin Trudeau warning him not to unilaterally approve The Trans Mountain pipeline. Manuel asserted the jurisdiction of the Secwepemc as the rightful titleholders for 518 kilometres – about half – of the pipeline route. Secwepemc approval could not be obtained simply by reaching agreements with a few federal Indian Bands in Secwepemc territory. Consent had to come from the people.

It is unclear whether an approval process that properly sought Indigenous consent would have achieved that approval; certainly it would have required much more substantive information and engagement than the current fatally flawed national Energy Board review process. The current process, which never recognized Indigenous rights and jurisdiction, was doomed to fail.

In documents for Kinder Morgan Canada’s initial price offering (IPO), the company identified “Aboriginal Relationships” as a risk factor for the company. But there was no evidence the company understands the complexity of those relationships, including the matter of Indigenous land rights and jurisdiction.

Kinder Morgan’s recent public comments on the suspension of its activity placed all the blame on the British Columbia and federal governments with no mention of the Indigenous land defenders or the blockade in Burnaby. On the very same weekend, the surprise announcement was made that the company refrained from having arrested the executive of the Union of B.C. Indian Chiefs, who had positioned themselves to be arrested. Their resistance is not simply an act of awareness-raising civil disobedience. They acted in defence of their inherent land rights and jurisdiction. Their actions are expressions of Indigenous law.

Trudeau insists that the pipeline is in the “national interest.” However, in service to the interest of one nation, Trudeau seems content to violate the rights of Indigenous nations. If Kinder Morgan succeeds in goading the federal government to curtail the efforts of the B.C. government to limit the pipeline, it is setting up a volatile situation.

In service to the interest of one nation, Trudeau seems content to violate the rights of Indigenous nations.

The Secwepemc have a well-established history of land defences, including the standoff at Gustafsen Lake. The unceded status of Secwepemc territory, the question of Secwepemc jurisdiction over their land, and the possibility of land defences create different – and greater – risk conditions from those articulated in Kinder Morgan Canada’s IPO. The company either does not understand those differences or has failed to disclose them. Either possibility should worry financial backers of the project.

The risks to investors from Indigenous jurisdiction extend beyond those financially backing Kinder Morgan Canada. Pundits and politicians are lining up to insist that the failure to deal with actions by the B.C.’s provincial government and other pipeline opponents is making investors nervous. Investors should be nervous. Canada’s economy has always depended on violations of Indigenous rights.

Indigenous Peoples have demonstrated that they will no longer allow their lands to be used by Canada in violation of their rights. Until Canada confronts the realities of Indigenous rights and jurisdiction, investment in Canada is much riskier than typically believed. Lenders and investors should understand that actions by Indigenous Peoples to protect their rights and land are the new normal and financial calculations should be adjusted accordingly.