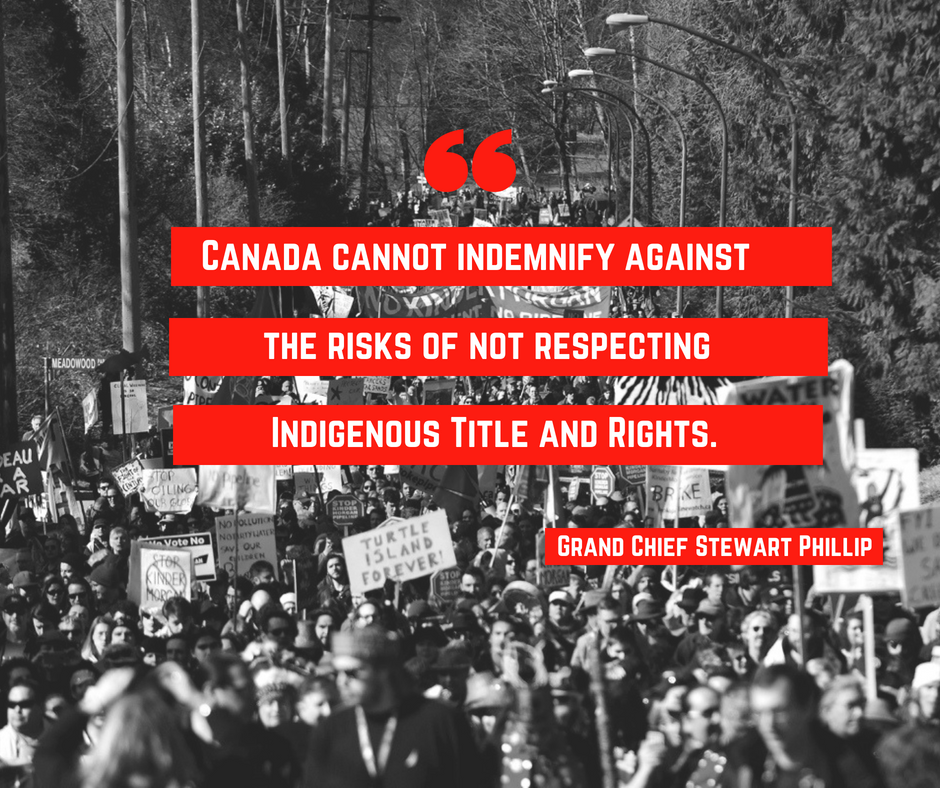 “No indemnity will insulate Kinder Morgan against First Nations opposition”

“Last week I attended the Kinder Morgan AGM in Houston, Texas, and advised President Richard Kinder and CEO Steve Kean, and the stockholders and lawyers, that there is a new reality. They were duped by Canada into thinking that they can proceed without the consent of Indigenous Peoples. I think they have begun to understand our message that the answer is still no- Richard Kinder himself provided an update to the stockholders that if Kinder Morgan decides to not proceed with the Trans Mountain Pipeline, the company will remain financially secure, and dividends will be paid,” said Chief Judy Wilson, Neskonlith Indian Band (te Secwepemc Nation) and Secretary-Treasurer of the UBCIC.

Kinder Morgan Inc. CEO Steve Kean (also Chair and CEO of Kinder Morgan Ltd, and former head of government relations for Enron) has confirmed that the company needs to see a resolution of the court case challenging the Federal Cabinet approval of Trans Mountain’s expansion heard by the court in Vancouver, last fall.  Specifically, "resolution" means an unequivocally favorable ruling for Kinder Morgan with no further court action possible. This condition for proceeding with the project has nothing to do with B.C. and if not met, Mr. Kean has said that it would be “too much to bear.”

“This morning’s desperate “announcement” once again demonstrates the disconnect between the reality of Indigenous Title and Rights and the federal government’s approach to Kinder Morgan,” said Grand Chief Stewart Phillip, President of the UBCIC.

“The world is listening, and while Morneau reiterated his government’s support for Kinder Morgan, the purpose of the press conference - to update Canadians on the progress of talks with Kinder Morgan - was lacking in specifics. Canada cannot indemnify against the risks of not respecting Indigenous Title and Rights.”

Journalists queried Morneau as he refused to address First Nations court cases against Kinder Morgan and continuing multi-jurisdictional opposition including on the ground in Burnaby, where the pipeline ends and Aframax tankers will be loaded with diluted bitumen to traverse coastal waters should the project proceed.

Chief Bob Chamberlin, Kwikwasut’inuxw Haxwa’mis First Nation and Vice-President of the UBCIC, “As tensions flare across the country, the rule of law, including the current state of Aboriginal case law must be respected.  In 2014 the SCC made a landmark decision recognizing Tsilhqot’in Title in William and provided a critical direction to the Crown and proponents to shift from consultation and accommodation to consent-based decision making.  The BC Supreme Court and Canadian Federal Court of Appeals have yet to rule on First Nation lawsuits that could still quash the project. Those verdicts are not expected before May 31.”

Chief Chamberlin concluded, “The United Nations Declaration on the Rights of Indigenous Peoples clearly articulates the need to secure the free, prior and informed consent of Indigenous Peoples on any project that directly impacts them.  We’re glad that Kinder Morgan and their stockholders have begun to understand the financial risk of not respecting Indigenous Title and Rights- and we’re waiting for Canada to follow suit.”

Opposition to Kinder Morgan’s pipeline and tanker project includes Indigenous leaders, the Province of British Columbia, the state of Washington, the cities of Vancouver, Burnaby, and Victoria, and 19 other BC municipalities, as well as 250,000 petition signers and more than 24,000 people who have pledged to do “whatever it takes” to stop Kinder Morgan’s pipeline and tanker project. Over 200 people have been arrested opposing the pipeline.

The BC Supreme Court and Canadian Federal Court of Appeals have yet to rule on First Nation lawsuits that could still quash the project. Those verdicts are not expected before May 31.